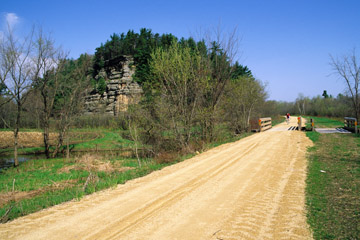 The 400 State Trail is one of the trails featured in the Wisconsin Rail Trailblazers DNR facebook contest.

MADISON -- Wisconsin is celebrating the 50th anniversary of the rails to trails program in the state this year and the public is invited to join in the celebration with a friendly Wisconsin rail trail competition on Facebook.

On June 6, National Trails Day, the Department of Natural Resources and Friends of Wisconsin State Parks will kick off a celebration of 50 years of rail trails with a ribbon cutting and rededication of the Elroy-Sparta State Trail hosted by Friends of the Elroy-Sparta State Trail and local community organizations. The Elroy-Sparta was the first rail trail conversion in the nation in 1965. June 6-7 is also Free Fun Weekend in Wisconsin, when trail passes, park and forest admission stickers, fishing licenses and out-of-state ATV passes are waived for the weekend.

DNR Facebook fans can join in a friendly "Wisconsin Rail Trailblazers" contest among the next 16 trails that were established after the Elroy-Sparta. People can vote once a day for their favorite trail and help them advance to the championship.

"The Elroy-Sparta is truly the granddaddy of rail trails not just in Wisconsin but in the nation, so with deference to its prestigious status we are starting the contest with the next 16 rail trail conversions in Wisconsin," says Brigit Brown, DNR state trails coordinator. The 16 trails are broken down into the following four geographic brackets (date indicates year established):

To take part in the fun, go to the DNR Facebook page (facebook.com/WDNR) beginning Wednesday, March 18 and click on the "State Trail Contest" tab. Then, click on one state trail in each matchup and fill out the short form at the bottom. The trails with the most votes move on to the next round, culminating in one trail being named the winner.

Each person casting a vote will be entered in a random drawing for a prize package consisting of a 2015 Wisconsin state park sticker, a 2015 Wisconsin state trail pass and a three-year subscription to Wisconsin Natural Resources magazine. Entrants can vote once per day from March 18-April 7. The winning trail and the winning entrant will be announced on Wednesday, April 8.