Elroy-Sparta State Trail first rail to trail in the nation

MADISON - Fifty years ago Wisconsin became the first state to convert an abandoned railroad corridor into a recreational trail -- the Elroy-Sparta State Trail -- initiating a "rails to trails" movement across the state, nation and the world. 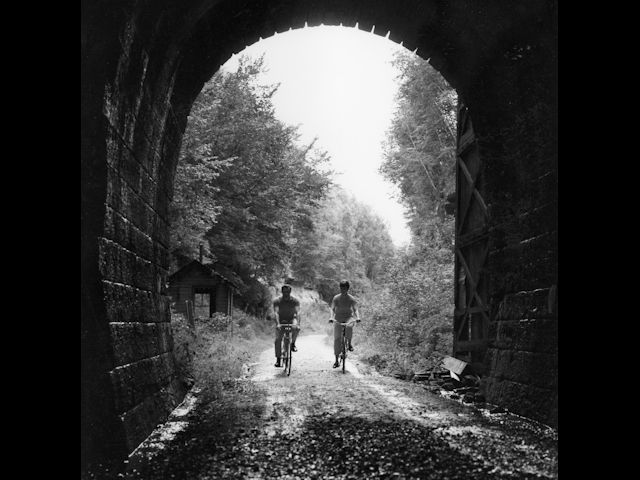 View the slideshow of historic photos from the Elroy-Sparta State Trail.

The Department of Natural Resources will be working with Friends of Wisconsin State Parks (exit DNR), local Friends Groups and other organizations to celebrate the 50th anniversary of the rail trails program in Wisconsin this year. The celebration will commence with a ceremonial ribbon cutting on the Elroy-Sparta State Trail at the Kendall Depot, on Saturday, June 6, which is also National Trails Day.

Since the establishment of the Elroy-Sparta State Trail in 1965, Wisconsin has developed an additional 40 state trails (36 of them rail trails) extending more than 2,000 miles. Nationwide there are more than 1,900 rail trails spanning more than 22,000 miles, according to the national Rails-to-Trails Conservancy.

The kickoff celebration takes place on National Trails Day, which is also the first day of Free Fun Weekend in Wisconsin, when trail passes, park and forest admission stickers, fishing licenses and out-of-state ATV passes are waived for the weekend. The celebration in Kendall is being coordinated by the Friends of the Elroy-Sparta State Trail and the Sparta Chamber of Commerce. A trail ride with participants starting at multiple communities along the trail is planned to converge at the Kendall Depot for a ceremonial ribbon cutting and rededication of the trail. Food and refreshments will also be available from local service clubs.

"We are encouraging rail trails across Wisconsin to join in the celebration with their own events any time in 2015. We're very proud of our state trails, but there are other rail trail providers in Wisconsin and we'd love for them to join in the fun of celebrating 50 years," says Brigit Brown, state trails coordinator for the DNR Bureau of Parks and Recreation.

Trails can have a significant economic impact for local communities, with a recent DNR and University of Wisconsin study [PDF] finding that, on average, individual trip spending of visitors to state trails was more than $90 per day.

Along with being the first railroad corridor converted to a trail, the Elroy-Sparta State Trail is also nationally known for its scenic beauty, historic depots and its three tunnels, the longest of which is three-quarters of a mile.

People interested in participating can keep abreast of activities by searching the DNR website for "trail news." Groups interested in organizing events on National Trails Day or throughout the year as part of the 50th anniversary of rail trails in Wisconsin are encouraged to contact Brigit Brown, state trails coordinator, at 608-266-2183 or Brigit.Brown@wisconsin.gov.