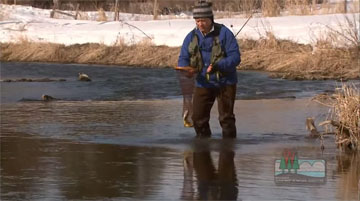 MADISON -- With statewide temperatures projected to remain below freezing through the first week in March, the 2015 Wisconsin early trout season may be on the chilly side.

The good news, state fisheries biologists say, is that many of the state's top trout waters feature strong groundwater flows and stay free of ice. So, the trout will be there waiting if anglers can gear up properly to manage the cold.

Most trout streams are open to early fishing with the exception of tributaries to Lake Superior and most streams in northeastern Wisconsin; check the current trout fishing regulation pamphlet for specific waters. Anglers are required to use artificial lures and flies; barbless hooks are not required.

"Our surveys found good trout populations were in Plum, Rush, Copper, Tainter and Sugar creeks," Weeks says. "Anglers looking for trophy trout should start looking in all of the aforementioned streams and the Kickapoo River."

Monroe County anglers have several hotspots to try in 2010. Weeks says DNR surveys at 25 sites on 10 streams show trout are present in good numbers with excellent average size. Anglers looking for action may want to visit the Little La Crosse River while those looking for a whopper should concentrate on the La Crosse and Kickapoo Rivers.

Many Vernon County streams also show high trout populations. Surveys at 35 sites on 10 streams indicate that anglers looking to catch trout should find a great return on their investment of time, says Weeks. Good starting places for quality fish are Bishop Branch Creek, the north and south forks of the Bad Axe River, Timber Coulee Creek, Springville Branch Creek, Elk, and Spring Coulee Creeks. For a chance at a trophy, head to the Kickapoo River, or the Bad Axe River.

In northwestern Wisconsin, "cold weather up to the opener should provide cold but clear water conditions," says Marty Engel, DNR fisheries biologist in Baldwin. "The Kinnickinnic and Rush rivers in Pierce and St. Croix counties will remain the most popular early season streams in the area. Anglers can expect lower trout densities but better quality size fish in the 2015 season."

In addition to strong natural reproduction that is occurring in many rivers and streams statewide, habitat improvements in recent years are contributing to increased survival and larger fish, the experts say.

Luke Roffler, DNR fisheries biologist for Racine, Kenosha and Walworth counties, says the Bluff Creek/Whitewater Creek system in Walworth County received a major facelift over a decade ago when the first habitat structures were installed to begin restoring a home for brown trout and the forage species they depend on. Today, the system supports reaches of Class 1 trout fishing, natural reproduction and brown trout up to 19 inches.

"This winter, the habitat improvements have continued in the system, including more than 670 feet of stream restoration on the Bluff Creek and Whitewater system," Roffler says.

Given the expected cold start to the season, anglers should target their time on the water to the warmest part of the day, typically from 11 a.m. to 4 p.m., says Heath Benike, fisheries operations supervisor in Black River Falls.

"This slight warm period each day is just enough to increase stream drift and the trout will respond with more feeding activity," Benike says. "As the season progresses into mid to late April, this window is expanded and trout will be active for longer time periods during the day. After spring run-off has occurred and the water temperatures start increasing, some of the largest trout landed each year are caught."

Benike suggests anglers should try using midge, mayfly and scud imitations during the early season; spinners and lures are likely to be productive in mid-to-late April after spring run-off has occurred.

Anglers should be aware that the game fish season on most inland Wisconsin waters closes at the end of the day on Sunday, March 1.

The panfish seasons remain open year-round as does the season for certain game fish on select lakes and rivers, including much of the Wisconsin River and its impoundments. Waters that remain open are listed in the fishing regulations on the DNR website.