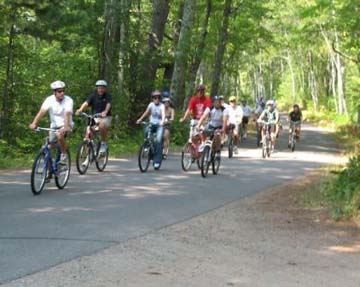 The Bikeways Project will evaluate existing roadways and trails to identify priority bikeway routes across Wisconsin.

MADISON -- The public will have an opportunity through a variety of public participation efforts to help identify, create and promote a network of mapped bicycle routes in Wisconsin.

The Wisconsin Department of Natural Resources, in coordination with other state agencies, and the Wisconsin Bike Fed are partnering to work on a statewide Bikeways Project. Toole Design Group has been hired as a consultant on the project. A bikeway is a road, street or path that is specifically designated for bicycle travel, may be designed for bicycle travel and may be shared with other modes of transportation or recreation.

The focus will be on establishing recommendations and turn-by-turn directions for Wisconsin segments of the United States Bicycle Route System, a network of long-distance bicycle routes across the country linking urban, suburban and rural areas through a variety of bicycling facilities.

Some of the benefits of state bikeways, Brown said, will be to increase access and options for long-distance bicycle travel, increase safety for bicyclists, and to promote physical activity. Environmental and economic benefits would include cost savings through energy conservation and pollution reduction, and increasing tourism and increasing public awareness.

According to a 2010 UW-Madison study, bicycle recreation and tourism contributes $924 million per year to the state's economy, $533 million of which is annual direct spending by both resident and non-resident cyclists on bicycle trip-related expenses such as food, lodging, entertainment, and taxes.

Two sets of public open houses that will be scheduled this spring and fall and a public comment period are planned, with the project expected to be completed by the end of this year.