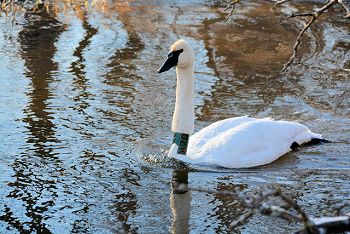 MADISON - A regal old swan spending the winter on a wild river in Burnett County stands as a remarkable symbol of the success of Wisconsin's trumpeter swan recovery program.

Known by her current identification collar number - the fourth ID collar over her lifetime - 82K turned 25 last June. She hatched from an egg that was collected in the first year of the Department of Natural Resources' swan recovery program. Over a nine-year period beginning in 1989, Wisconsin biologists flew to the wilds of Alaska to collect up to 50 trumpeter swan eggs a year.

Trumpeter swans are the largest waterfowl species in North America. Adults are all white and stand up to 5 feet tall, weighing between 20 and 35 pounds with a 7-foot wingspan. Market hunting and demand for their feathers brought these birds to near-extinction by the 1880s.

Alaska has a healthy trumpeter swan population and studies have shown the egg collection does not harm that population. The biologists left at least two fertile eggs in each nest to ensure that the nesting pair could raise a brood.

Of the 385 eggs they collected, 356 -- or 92 percent -- successfully hatched in incubators through a cooperative program with the Milwaukee County Zoo.

Sumner Matteson, the DNR avian ecologist who oversaw the trumpeter swan recovery program, was one of the biologists on that trip and despite "acute air sickness," from flying in the small U.S. Fish and Wildlife float plane, collected the egg, which was labeled U-2.

"I was in such a wretched state that Rod King, the USFWS pilot, even jokingly asked 'You aren't going to expire on me, are you?'," Matteson said.

Matteson said he remembered the U-2 egg not just because it shared a name with one of his favorite rock bands, but because the resulting cygnet shared his birthday.

From there she was placed in a captive-rearing program at a pond at the General Electric Medical Systems facility near Pewaukee and raised until 2 years of age, when she was banded with a USFWS band. She received her first collar before being released on May 8, 1991 at South Bass Lake in Burnett County.

Swans hatched at the zoo over the nine years were either placed in the captive rearing program or an innovative decoy rearing program where they were released in the wild but reared by humans in white swan costumes.

Like all swans released to the wild, 82K has been monitored over the years and has been recaptured and re-collared three times. She has successfully raised several broods of her own, nesting at the Crex Meadows State Wildlife Area, and in more recent years has been observed guiding other young birds.

"Her current collar is cracked, but we won't be replacing it," Matteson said.

From its humble beginning with the collection of those 40 swan eggs, the Wisconsin trumpeter swan population has steadily increased. The original recovery goal of 20 breeding pairs by 2000 was doubled; by 2009 there were more than 200 breeding pairs in the state and the species was removed from the state endangered species list.

Scores of organizations, businesses and private individuals worked to carry out the recovery effort with state wildlife managers, including Milwaukee County Zoo staff, University of Wisconsin-Madison wildlife ecologists, USFWS staff and Windway Capital Corp. owners Mary and Terry Kohler of Sheboygan who flew the biologists to Alaska and back for each trip. The Natural Resources Foundation of Wisconsin played a significant role along with the Johnson Family Foundation and the Pittman-Robertson Federal-Aid-in Wildlife Restoration Fund to provide program support.

As of 2-14, biologists counted 253 breeding pairs in 27 counties, with an estimated population of more than 2,000 trumpeter swans in the state.

Up until now, DNR biologists have worked with local volunteers and other DNR staff to actively monitor up to 150 nests in Wisconsin annually. Those efforts found that swans generally successfully hatched three young per nest.

A Burnett County couple have been keeping an eye on 82K for many years and reported to Matteson that they hadn't seen her since April and were afraid she wasn't coming back. They reported she returned in mid-November.

Beginning next year, Matteson said, Wisconsin will move to a new monitoring system as part of the North American Trumpeter Swan Survey. Instead of biologists or volunteers tracking individual nests, aerial surveys will fly transects to obtain a population estimate.

At least that is the plan for general population monitoring. For 82K, who has surpassed the general life expectancy of a swan in the wild of 18 to 20 years, there will still be a biologist with a shared birthday keeping his eyes on the matriarch of the Wisconsin trumpeter swan recovery effort.