MADISON -- The Wisconsin Department of Natural Resources has been awarded a $32,000 grant by the U.S. Fish and Wildlife Service through the Mississippi River Basin Panel to lead a project that will help determine the distribution of the invasive New Zealand mudsnail in Illinois, Iowa and Wisconsin.

The New Zealand mudsnail was found in Dane County's Black Earth Creek in 2013 - the first appearance of the harmful invader in the Midwest outside of the Great Lakes basin. Although it measures just one-eighth of an inch in length, New Zealand mudsnails can multiply quickly through asexual reproduction and outcompete native insects that are used by trout and other fish for food. The snails also have a "trap door" that can be used to close their shells and prevent drying.

Maureen Ferry, a DNR aquatic invasive species monitoring coordinator, said the snail's small size makes them very transferable and once they begin to colonize a new stream, they are difficult to detect with traditional sampling methods. 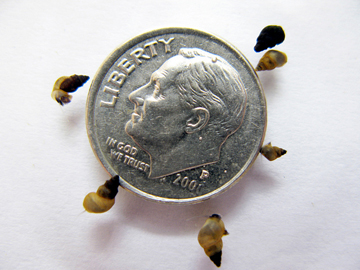 "The small size of the snails makes them easy to move from stream to stream and their ability to seal their shells allows them to survive out of water for one month, possibly more," Ferry said. "By learning where they are located, we can better target prevention efforts."

The aquatic invasive species coordinators from Iowa and Illinois agree with the approach.

"We know that Iowa trout anglers fish streams all across the country," said Kim Bogenschutz, of the Iowa DNR. "Being able to detect a new infestation quickly will help us protect Iowa's valuable streams."

Kevin Irons, of the Illinois DNR, said effective prevention efforts include draining water from equipment and removing plants, debris and mud with a stiff bristle brush and tap water. Irons said the joint research may yield new clues to help stop the spread of the aquatic hitchhikers.

"Through the grant, we look forward to working with Wisconsin and Illinois to gain new insights into preventing the snails," he said.

Thanks to the grant, awarded in mid-September, Wisconsin DNR will search for New Zealand mudsnails using environmental DNA surveillance. The technique is especially effective at detecting the presence of the species at low densities where traditional sampling techniques may fail to find them. A pilot project led by Wisconsin DNR earlier this year helped refine the technique that will be used to carry out the grant work.

The Wisconsin DNR will collaborate with the United States Geological Survey and the University of Wisconsin-Stevens Point to process eDNA samples from 28 sites across Wisconsin and eight sites each in Iowa and Illinois. The work has already started and results will be available by early 2015.

Bob Wakeman, aquatic invasive species coordinator for the Wisconsin DNR, said the effort is a prime example of the strong partnerships needed to combat the snails and other invasive species.

"Wisconsin's aquatic invasive species program is based on partnerships, both within the state and throughout the region," Wakeman said. "Our close ties to neighboring states will allow us to understand how widespread the New Zealand mudsnails are, while our relationships with Wisconsin scientists will allow us to efficiently get the necessary eDNA work done."