MICHIGAN MUSKIES GETTING FIT TO FIGHT IN WISCONSIN

When a minnow strays too close, the fish dart quickly from the artificial cover, showing off their ultimate potential to make a strong Wisconsin fishery even better. With a few months of steady feeding ahead, these fingerlings will soon gain the weight and size they need for a successful introduction into brood-stock lakes managed by the Wisconsin Department of Natural Resources as well as the waters of Green Bay. 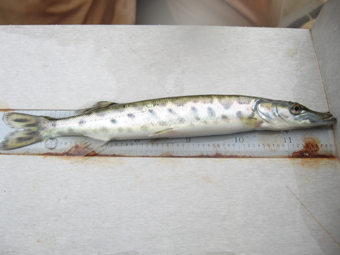 This Great Lakes spotted musky fingerling is every inch the fighter. The fish are gaining size and weight thanks to a steady diet of minnows at Wild Rose.
WDNR Photo

"These Great Lakes spotted muskies represent an important step forward in our efforts to restore a strong and naturally reproducing population to the waters of Green Bay and Lake Michigan," said Steve Fajfer, supervisor of the Wild Rose hatchery. "In recent years, the waters of Green Bay, Sturgeon Bay and area tributaries including the Lower Fox and Menominee rivers have become known as great destinations for musky fishing -- particularly in the fall. This strain of fish from Lake Huron should help us create even more exciting opportunities in the years ahead."

Tim Simonson, a DNR fisheries biologist and expert on muskies, said the productive waters of the region offer optimal conditions for the fish to grow, with current data predicting an average adult size of nearly 53 inches for female fish and 47 inches for males.

"The muskellunge in Green Bay grow relatively quickly and we also see high rates of catch-and-release fishing in the area. These factors really contribute to the area's reputation for trophy fish," Simonson said. "As we continue to diversify the genetics with the addition of these latest fish, we are looking at truly world-class opportunities in the years ahead."

Although spotted muskies are native to Green Bay and other Lake Michigan waters, overfishing, loss of habitat and diminished water quality extinguished local populations by the mid-1900s. DNR began a reintroduction program by obtaining spawn from a Lake Huron tributary in Michigan 1989. Additional genetics and fingerlings have come from Lake St. Clair in Michigan as well as Lake Huron's Georgian Bay in Canada. 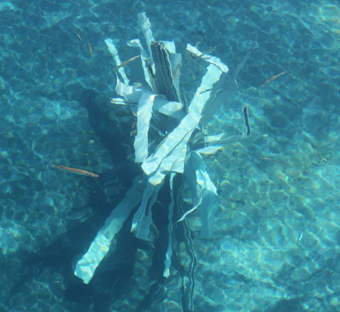 The establishment of brood-stock lakes in Wisconsin starting with Long Lake in 1989 has allowed for more efficient production of spotted musky fingerlings and stocking volume has ranged from 2,000 fish to as many as 30,000 per year in the early 2000s. However, the number of original wild fish that contributed to the brood stock was relatively small and the 2012 Green Bay Great Lakes Spotted Musky Management Plan [] pointed to the need for continued expansion of the source population.

"We've been pleased to see that some natural reproduction is occurring in Green Bay and we are finding a limited number of young, wild Great Lakes spotted musky," Simonson said. "However, we believe that with the introduction of a more diverse breeding population and an expanded number of stocking locations, we'll ultimately increase the chances for successful natural reproduction in the region."

The new batch of 12,000 fingerlings from Wolf Lake State Fish Hatchery in Michigan is part of a cooperative effort to improve musky genetics in both states. While Michigan recently has focused on the Great Lakes spotted strain, Wisconsin's highly successful inland lake musky breeding program is contributing fish to help expand the inland strain stocking program there.

If all goes as planned, some 2,000 of the fierce fingerlings now stalking the ponds at Wild Rose will be transferred to the three brood-stock lakes in summer 2015. The remaining fish are destined for a variety of locations throughout Green Bay in an effort to maximize the use of potential habitat.