MADISON -- The highly successful renewal of Milwaukee's Menomonee Valley is not only a showcase on how to revitalize blighted urban areas, it's also a shining example of the key role the Department of Natural Resources plays in these efforts, a recent report revealed.

The non-partisan Public Policy Forum recently released the study "Redevelopment in Milwaukee's Menomonee Valley: What Worked and Why?" with the hope the report will serve as a road map to guide other communities facing similar challenges across the state. 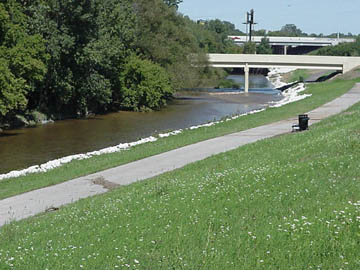 The Hank Aaron State Trail runs through the Menomonee Valley. A new study on the valley's redevelopment points out the importance of state partnerships in the cleanup and redevelopment of contaminated properties.
WDNR Photo

The study points out the importance of state partnerships in the cleanup and redevelopment of contaminated properties, known as "brownfields," and mentions the DNR's role in oversight and approval of cleanup projects as well as the agency's work on the Hank Aaron Trail and the Menomonee River.

"DNR staff members...are viewed as having helped to move Valley projects through necessary brownfields cleanup approval processes in a collaborative and timely fashion," the report stated. "The positive impact of the DNR's increased 'flexibility, cooperation, and willingness to negotiate' ...was a key finding of national research on Wisconsin's brownfields redevelopment efforts."

"The report points out something we've been saying all along - that economic and environmental work can and should go hand in hand," said DNR Secretary Cathy Stepp. "We're thrilled to play a role in these efforts, because it means we're helping create economic opportunities for communities while protecting our world-class natural resources."

Stepp noted the study comes during the 20th anniversary of the passage of the 1994 Land Recycling Act, the state's brownfields law that helped set the table for many of the initiatives and DNR programs currently in play today.

Since 1994, the DNR has helped complete cleanups at more than 15,400 properties. Many of these sites were tax delinquent, financially dragging down counties, cities and towns, but today have become economic assets, helping create or retain jobs. That includes the Menomonee Valley, where the report shows more than 3,200 new jobs were added between 2002-2011.

Darsi Foss, program director for the DNR's Remediation and Redevelopment Program, noted that since 2004 the program has helped prepare 19,500 acres for redevelopment and has been instrumental in leveraging public and private dollars toward brownfield projects, including the agency grabbing $11.4 million in federal dollars for cleanups and $2.1 million for environmental assessments.

To help facilitate those redevelopments, the DNR has issued more than 4,000 "comfort" or assurance letters and liability exemptions as part of the tools created in the Land Recycling Law.

"Our state brownfields program is a national model, and we're very proud of that fact," said Foss. "Over the past two decades our staff helped 'bridge the gap' with technical, liability and financial assistance and, in many cases, our involvement has served as the catalyst in getting a project off the ground."

The study lists several key lessons learned through the Valley example that may help guide other communities, including strong intergovernmental cooperation and public-private partnerships, especially for large-scale redevelopments.

The "Redevelopment in Milwaukee's Menomonee Valley: What Worked and Why?" (exit DNR) report is available on the Public Policy Forum's website.

To view more information about the DNR's brownfields program, including the "Top 100" success stories, search the DNR website dnr.wi.gov for keyword "brownfield."