MADISON -- The 10th annual Invader Crusader award ceremony took place June 5 at Olbrich Botanical Gardens in Madison. In total, nine awards were presented to individuals and groups from around the state to recognize their efforts in fighting invasive species and taking initiatives to educate others.

"This year's pool of nominations was the strongest we have seen yet, representing a lot of good work by a lot of good people," says Paul Schumacher, Wisconsin Invasive Species Council chair. "Those who submitted nominations also deserve a lot of credit and a hearty thank you for taking the time to recognize the efforts of Wisconsin's Invader Crusaders."

Invader Crusader awards are given during the month of June, which is Invasive Species Awareness Month. During June, the Wisconsin Invasive Species Council advertises events on its website in which hundreds of citizens of all ages across the State will take part. These events include volunteer invasive species removal and education activities at nature centers, botanical gardens, natural areas, lakes, rivers, agricultural fields, parks, schools, institutions of higher learning, and more.

The four young women of Girl Scout Troop 2789 are being honored for their impressive efforts engaging other community members, volunteer groups, and local businesses in a successful purple loosestrife biocontrol project around Lac La Belle. They are continuing their work by teaching other community groups how to replicate the project. 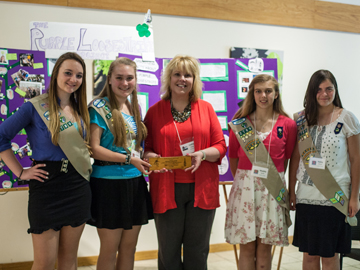 A collaboration of natural resource professionals and interested public members working to identify, monitor, and control invasive species in Door County, the Door County Invasive Species Team marshals human and financial resources to manage invasive species across Door County. Solid planning enhances the team's ability to strategically engage the talents of its members, reach out to key audiences, and engage volunteers efficiently - maximizing the benefits of thousands of hours of volunteer work across the county, on both aquatic and terrestrial species. 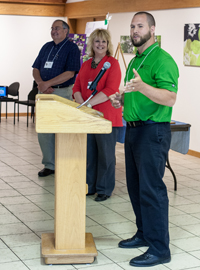 Nickels' crusade against invaders is both intensive and extensive. As Director of Education and Restoration at the Mequon Nature Preserve, Nickels implemented an intensive plan to control or eradicate all invasive species in the largest nature preserve in the four-county Milwaukee area. The reach of his success extends to the 7,000 students and 10,000 people that annually visit the facility and learn about invasive species. Students and visitors now marvel at the 190-year old white oak that was "discovered" after buckthorn was removed from a 6-acre woodlot. The preserve's transformation teaches about both the damage that invasive species can do and the incredible restoration that can result when invasives are intensely managed. 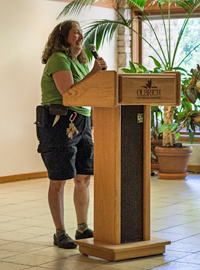 Fourteen years ago, Bieberstein founded the Madison Area Weed Warriors. On a shoestring budget, she leads volunteer work parties each weekend in April and May. Not only have her volunteers put in over 4,600 hours in Madison's eight conservation parks, they use their new invasive species identification and management skills in the places they live, work, and play. Bieberstein engages the community in all of her efforts to combat invasive species, spreading the word through Madison schools and community groups. 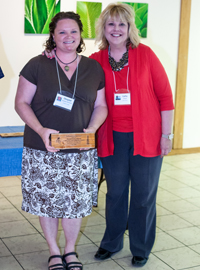 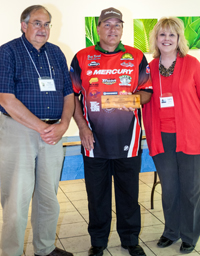 Karch's passion is angler education, with a strong focus on youth. He incorporates Stop Aquatic Hitchhikers! curriculum into the many seminars and clinics that he teaches. This past year, he volunteered over 400 hours in angler education and held his 100th fishing clinic. His "Learn 2 Fish With Us" angler education program has reached 10,000 anglers, most of them youth. Learning how to prevent the spread of invasive species is just as important as learning casting skills and lure selection techniques, and Karch is sure to instill this belief in all of his seminar participants. 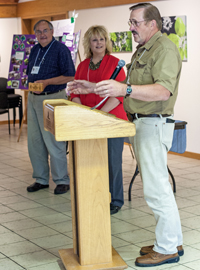 Ward has been going strong for 32 years and has spent his entire career as a conservationist, working to protect natural resources and prevent the spread of invasive species. His record of achievement is extensive, rich with a variety of both aquatic and terrestrial projects, spans eight counties, and focuses on developing sustained volunteer groups that continue improving Wisconsin's lands and waters. 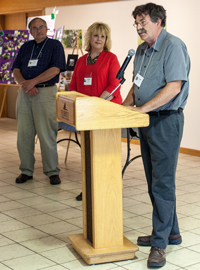 Yanny has helped build bridges between the nursery industry, regulators, and the conservation community since work on Wisconsin's invasive species rule began. Owner of JN Plant Selections, LLC and senior horticulturist at Johnson's Nursery, Yanny served on teams of experts evaluating species considered for regulation. He goes above and beyond, helping regulators construct good regulations and helping the nursery industry understand the need for, the value of, and how to comply with those regulations. Ultimately, Yanny helps to change attitudes so that we all can enjoy healthier natural ecosystems. 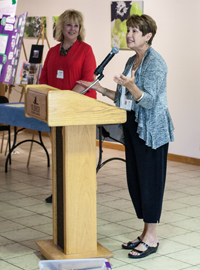 "Let the little ones lead" is Ruch's motto. Inspired by children's ability to learn safety lessons, Judy developed an hour-long program about stopping the spread of aquatic invasive species that can be adjusted for preschoolers through elementary years. The program was such a success that the Wisconsin DNR worked with her to disseminate it to libraries statewide and through DNR's website where teachers across the country have found it and brought it home to their students.