MINOCQUA - The northern zone musky season opens May 24 with water temperatures warming up quickly and anglers likely to reap the benefit of more than 20 years of improvement in musky sizes and numbers.

"We had a late ice out but it's warming up quickly," says Steve Avelallemant, longtime DNR northern district fisheries supervisor. "I think it will be a pretty normal opening. Spawning will be a little bit behind but not weeks behind."

Avelallemant expects the musky action to be good for anglers, and chances are getting better that anglers will find themselves fighting and boating bigger fish.

"We've looked at a variety of measures and we've definitely seen an increase in the last 20 years in the number of muskies 45 inches and larger," says Tim Simonson, a DNR fish biologist who chairs DNR's musky committee. 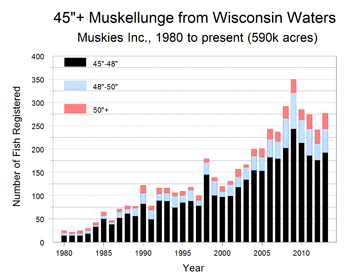 The number of 45-plus inch fish registered by Muskies, Inc., members, and the size of the largest fish caught by participants in the National Championship Musky Open in Eagle River in August and during the Vilas County Musky Marathon, a season-long competition, have all been increasing over the past 20 years, Simonson says.

"Things are definitely getting better," he says. "Most of it is due to the voluntary release of fish by avid musky anglers in combination with more restrictive regulations through time." Background on this trend is detailed in "Long live the kings," a Wisconsin Natural Resources magazine article.

A 40-inch size limit in effect statewide since 2013 is expected to help increase the number of larger fish even more, Simonson says. "We know from our evaluations that it takes at least 10 years to see any population level effects, but based on what we've seen on waters that have had the 40-inch limit, we can expect to see continued improvement in size structure."

The 40-inch limit applies to 94 percent of musky waters in Wisconsin. There are 41 waters that continue to have either lower size limits or higher size limits. Starting this year, waters of Green Bay and Lake Michigan north of Highway 10 carry a 54-inch minimum size limit. The bag limit is 1.

Check the Guide to Wisconsin Hook and Line Fishing Regulations for specific waters or check DNR's online regulation database to find size limits on the inland lake you plan to fish for musky.

Find where to fish for trophy musky or fast action waters, along with information on safely releasing musky, and musky management in Wisconsin, by searching dnr.wi.gov for "musky

Musky forecasts in Wisconsin for 2014

Fish biologists from across the state filed musky forecasts for some of their more popular waters where recent surveys revealed fish size and abundance information. Those forecasts are found in the 2014 Wisconsin Fishing Report musky forecasts.