MADISONSome Wisconsin residents will see and hear loud, low-flying planes as early as sunrise beginning in late May. Planes will be spraying for gypsy moth caterpillars, invasive and destructive pests that feed on the leaves of many species of trees and shrubs. 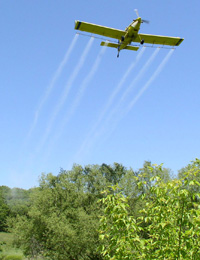 Spray dates and times are weather dependent. People can sign up to receive e-mail notifications about spray plans at gypsymoth.wi.gov (exit DNR). There is also a recorded message about spray plans available by calling the toll-free Gypsy Moth Information Line at 1-800-642-6684. Press menu option 1 for updates.

Spraying depends on favorable weather conditions--calm winds, no precipitation and high humidity. Planes may start spraying as early as 5 a.m. The planes fly very low and loudly over treatment sites and surrounding areas. Planes will remain in the area until the completion of the day's spray plans and as long as weather conditions remain favorable. Spraying may last into the late morning or afternoon.

Spraying could occur any day of the week, including weekends.

Most sites will be sprayed with Foray, which contains Bacillus thuringiensis var. kurstaki (Btk). Btk is a naturally-occurring soil bacteria that kills gypsy moth caterpillars when they ingest it.

Btk is not toxic to people, bees, pets or other animals. However, some people with severe allergies may wish to stay indoors during nearby spray activities or avoid areas to be sprayed on the day that spraying occurs.

The formulation of this bacterial insecticide used by the state's cooperative gypsy moth program is listed with the Organic Materials Review Institute as acceptable for use in certified organic food production.

In areas with endangered species of butterflies and moths, a gypsy moth-specific product called 'Gypchek' will be used instead of Btk.

The Slow the Spread program will also spray a mating disruptor to additional sites in western Wisconsin between mid-June and mid-August. The pheromone in the mating disruptor makes it difficult for male moths to find female moths in low, isolated populations, preventing reproduction.

For more information about the programs or gypsy moths, visit the website gypsymoth.wi.gov (exit DNR) Or, call the toll-free Gypsy Moth Line at 1-800-642-MOTH (1-800-642-6684) to hear a recording of the programs' current spray plans or talk to staff.