MADISON - The massive Germann Road Fire that swept through Douglas County last May consuming nearly 7,500 acres and burning more than 100 buildings, including 23 homes reinforces the importance of wildfire prevention and preparedness, according to state forestry officials who making the observance of April 20-26 as Wildfire Prevention Week a prime time to review ways to stop an unwanted fire from starting and then spreading. 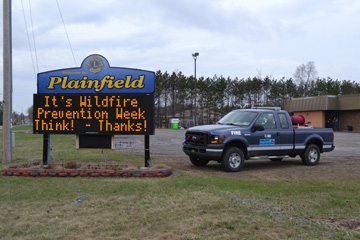 Department of Natural Resources fire officials remind residents and property owners that personal responsibility is the key to preventing and to preparing for wildfires, and it can start with something as simple as a walk back to make sure a burned debris pile is truly out.

"Wildfire Prevention Week is prime time to get centered on preventing fires from starting and preparing homeowners living in or near the wildland in the event a wildfire happens," said Catherine Koele, DNR wildfire prevention specialist. "This time of year, wildfires are a reality and can happen anytime fire is introduced in the outdoors."

Debris burn piles - the top cause of wildfires

The risk for wildfires increases in the spring as many landowners do their annual tradition of yard clean-up. It is common to see burning piles of discarded leaves, brush and pine needles. This practice coupled with warm, dry and windy days result in debris burning as the No. 1 cause of wildfires. Koele says these account for 30 percent of all wildfires reported in DNR Protection Areas.

"Many responsible debris burners obtain proper permits, conduct their burn, but neglect to make certain their fire is out before leaving," Koele said. "It is especially important to double-check for hot coals left behind from debris piles. Oftentimes, ash still contains smoldering embers which can escape on a windy day and cause a wildfire."

Regardless of the intent of the fire, Koele says, one tiny ember can trigger a massive wildfire and place residents, homes and natural resources at risk. Embers are carried by the wind and can rain down on homes like an ember blizzard.

Jolene Ackerman, DNR Wildland Urban Interface Specialist of the Firewise program, says doing some easy fire prevention steps around the home could mean the difference when a fire is approaching.

"Focusing on the immediate 100-200 feet surrounding the home or what is referred to as the 'home ignition zone' is the key to a home's survival," Ackerman said. "Simple actions such as raking leaves and pine needles away from the buildings and removing dead vegetation from the landscape can make all the difference."

The Germann Road Fire was the biggest wildfire Wisconsin faced in more than 30 years; and, it caught the attention of property owners, government officials, the media and many others who live with the reality that a wildfire can happen right in their backyard.

"A wildfire of this magnitude reinforces the importance of fire prevention and preparedness," Ackerman said. While many home and property owners suffered tremendous losses, the DNR is using the Germann Road Fire as an example to heighten awareness during Wildfire Prevention Week.

Ackerman says the DNR recommends homeowners do the following:

After the Germann Road Fire, a team of fire specialists conducted structural assessments on homes within or near the fire perimeter. "Results have shown that homes can survive without the intervention of structural protection by fire departments if homeowners would take the time to make their properties Firewise," Ackerman said.

The "Be Ember Aware" campaign is currently running in various markets statewide and includes radio, TV, print and online advertisements, an in-depth video, flyers, refrigerator magnets, display banners and other promotional materials. The campaign will be utilized throughout the spring during Wisconsin's traditional fire season.

To view a 4-minute video featuring footage from the Germann Road Fire, conduct a homeowner self-assessment or for more information on the "Be Ember Aware" campaign, search the DNR website dnr.wi.gov for keyword "ember."

Fire officials also will be live and online for a Thursday DNR Ask the Experts chat about fire prevention this Thursday, April 24, at noon. Join at dnr.wi.gov and open the link in the video box at the right.