MADISON - Wisconsin's parade of migratory birds - although a little behind schedule due to cold spring temperatures - is starting to arrive and an April 22 live online chat with state birding experts will help people get ready for the big month ahead. 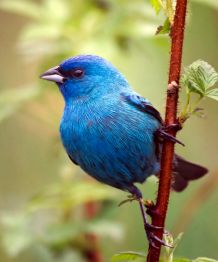 "May is the time to be a birder in Wisconsin," says Ryan Brady, a Department of Natural Resources research scientist who leads bird monitoring efforts for the Wisconsin Bird Conservation Initiative. "Wisconsin is not only a destination for more than 225 breeding species but also provides critical resting and refueling habitat for millions of migratory birds en route to points farther north. Many of these birds, including crowd favorites such as warblers, orioles, grosbeaks, buntings, and hummingbirds, make their return into the state during the month of May."

The online birding chat with Brady, Kim Grveles, who coordinates the Wisconsin Stopover Initiative, and Yoyi Steele, coordinator for Wisconsin's Important Bird Areas (IBA) program, starts at noon on Earth Day, April 22. To join, visit the DNR web site at dnr.wi.gov, and look for the box on the right to enter the chat, or search the phrase "ask the experts." Or join the conversation on the DNR Facebook page, www.facebook.com/WIDNR, by clicking the "Cover it Live Chat" box on the top of the page. The transcript of the chat will be archived at that same link.

"Wisconsin sits at a crossroad for species of eastern woodlands, western grasslands, southern savannahs, and northern forests," Brady added. "These combine with unique habitats like jack pine barrens, abundant wetlands, and migration corridors along the Mississippi River and Great Lakes to bring an amazing array of birds our way." According to the Wisconsin Society for Ornithology, more than 400 species have been recorded in the state.

The vast majority of these birds - both species and numbers - are migratory; some are permanent residents, like chickadees, cardinals and turkeys. The migrants fall into two categories - short distance migrants that breed here and spend the winter somewhere in North America, often just a few hundred miles south. Red-winged blackbirds, eastern phoebes, many sparrows, waterfowl and most grassland birds are examples.

Their return is strongly influenced by local temperatures and snow/ice conditions, and this year, they've stayed away a little longer because of the cold weather, Grveles says. The southern part of Wisconsin has caught up a bit in recent weeks but only the leading edge of this migratory front has reached northern Wisconsin so far.

The second group includes long distance migrants that breed in Wisconsin or north across the boreal forest but winter in Central America, the Caribbean and South America. Wood thrushes, scarlet tanagers, hummingbirds, Baltimore orioles and most warblers are good examples of this group. Their migration is linked mainly to changes in day length, also known as photoperiod, so their arrival doesn't differ much year to year, she says."This year's weather means more of the short-distance migrants will be present at the same time that the long-distance travelers normally make their appearance," Grveles says. "The result should be a fantastic display for people who love to watch birds and for the communities that benefit from having them around."

Many bird conservation groups, state parks and communities are sponsoring events for International Migratory Bird Day, May 10, or at other times during the month. That includes perhaps the biggest and best known, the Horicon Marsh Bird Festival, a four-day feast of bird watching events by foot, boat and bus, presentations, photo contests and more.

The number of bird watching events has swelled in recent years with the founding of Bird City Wisconsin in 2010, a statewide program of the Wisconsin Bird Conservation Initiative aimed at helping urban residents maintain healthy populations of birds and understand birds' importance to their economies and quality of life. The program requires communities to host an International Migratory Day event to gain the Bird City designation.

Eighty-one communities of all sizes, from cities to villages to towns to counties, are now certified as Bird Cities in Wisconsin. Discover more about Bird City, May bird watching events, and other ways to enjoy the spectacle of spring bird migration at the April 22 online chat.