Editor's note: This and the trout stocking release are the first in a series of releases relating to the 2014 fishing season. Check back in coming weeks for stories on new informational tools available for anglers, fish consumption advice and new findings supporting the health benefits of sport-caught fish, cold water boating safety, and how to keep Wisconsin fish healthy by taking steps to prevent spreading aquatic invasive species and fish diseases. 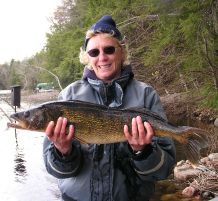 Anglers trying their luck at the 2014 inland fishing opener get a shot at this nice walleye caught and released by DNR creel clerk Donna Sorenson during spring surveys in Connors Lake in Sawyer County.
WDNR Photo

MADISON - Anglers heading out for the May 3 opening day of Wisconsin's regular inland fishing season will find a mixed bag of fishing conditions but strong populations of anglers' favorite fish species as well as the opportunity to harvest largemouth bass in northern Wisconsin for the first time in 22 years.

"People can look forward to another year of exciting fishing in Wisconsin," says Mike Staggs, fisheries director for the Wisconsin Department of Natural Resources. "It's clear it's going to be another later spring like last year, so what worked for people last year is a good bet to work again this year.

"Opening day is a great Wisconsin tradition, so whether you're fishing open water or setting tip-ups, we hope to see you out enjoying the day and reeling in another year of great fishing stories."

This will be Staggs' last opening day as Wisconsin's fisheries director; he's announced his retirement as soon as DNR finds his successor.

"The ice is about 20 to 24 inches on most lakes right now and this coming week is predicted to be pretty cold so no more significant melting until near the weekend again," says Steve Avelallemant, longtime DNR fisheries supervisor in northern Wisconsin. 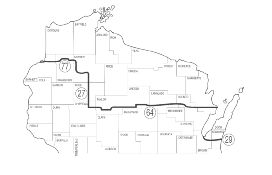 "But we've still got almost three weeks to the opener and it might finally turn into full blown spring by this next weekend. My best guess is that we will have ice-out by the opener on most lakes in the north."

Avelallemant says that early spawning game fish like northern pike and walleyes will still be spawning and in-shore so anglers should key on the spawning substrates for both species.

"Panfish and bass won't even be thinking about spawning and will likely be in the shallower bays off of the main lakes where those are available," he says.

Skip Sommerfeldt, DNR fisheries biologist stationed in Park Falls, suggests walleye anglers try rivers, smaller flowages, and smaller lakes where the ice is more likely to have melted by May 3.

"The rivers are going to be open, and maybe some of the smaller flowages and lakes," he says. "Walleye anglers will want to target those waters and use early season tactics and baits."

Walleye are likely to be right in the middle of spawning on opening day. "Walleye do feed during their spawning period," Sommerfeldt says. "They usually spawn at dark in water six inches to three feet, and during the day, they'll drop back to a little deeper water from 6 to 20 feet. Try throwing a rapala along rocky points or even a jig and minnow on the gravel drop offs."

Sommerfeldt says that panfish also will be another good target for anglers fishing northern Wisconsin and looking for their first shore lunch of the season.

"Look for shallow, warm bays with a weedy or mucky bottom. Try a slip bobber with a small minnow or a worm along any emergent weed lines or on the mud flats in 2 to 4 feet of water."

"Walleye and pike will be finished spawning and looking for an easy meal. Minnows and small crank baits worked slow should trigger bites. Sheltered bays with trees in the water should be a good place to find crappies and bluegills on sunny warm days. Small jigs and crappie minnows should be baits of choice for early season panfish."

Hujik says that trout anglers should find the streams in good shape, unless there are some locally heavy rains. "Early season anglers have been reporting good catches of trout on many of the western Wisconsin streams during the early catch-and-release trout season," he says. "So it stands to reason that the regular season will be no different."

Anglers can find information about fish populations in specific waters in the 2014 Wisconsin Fishing Report. Forecasts are arranged by fish species and listed in alphabetical order by county.

Largemouth bass can now be harvested statewide starting May 3

This year, for the first time in 22 years, anglers fishing in northern Wisconsin can take home largemouth bass on opening day.

The bass catch and release season in place in northern Wisconsin since 1992 has been culled -- smallmouth bass are still protected from harvest but largemouth bass are now fair game in the northern bass zone.

"Bass populations throughout the state are doing great, particularly in terms of numbers, and largemouth bass are doing so well in northern Wisconsin that we're having some issues with slow growth," says Jon Hansen, a fish biologist who leads DNR's bass team. "So starting May 3, you can harvest largemouth bass statewide. They make for a fine fish fry, so don't feel bad taking a few home if you want."

The largemouth bass season runs from May 3 to March 1, 2015. Smallmouth bass must still be immediately released in the northern zone from May 3 through June 20. From June 21 to March 1, smallmouth bass 14 inches and greater in the northern zone may be harvested. During the harvest season for each of the bass species, anglers are allowed a daily bag limit of five bass in total. While the statewide length limit for bass is 14 inches, many waters have no length limit so check the hook-and-line regulations for specific waters.

Musky season opens May 3 in the southern zone and May 25 in the northern zone. The northern zone is the area north of highways 77, 64 and 29, with Highway 10 as the dividing line.

DNR hasn't yet released final fishing regulations for the Ceded Territory but they will be posted before opening day on the regulations page. So check back or sign up to have them delivered by email when they are posted.

New veterans' program, discounts for first-timers make it easy to share the fun

Veterans who wish to receive a free license must first contact the Wisconsin Department of Veterans Affairs to determine their eligibility for this program. Such eligibility-related questions should be directed to the Veterans Benefits Resource Center via web chat [www.wisvets.com (exit DNR)], email wisvets@dva.wisconsin.gov or phone 1-800-WIS-VETS (947-8387).

Anglers who have never purchased a fishing license - or who haven't purchased one in 10 years - can get a discounted "first time buyers" license. The discounts are automatically applied when the license is purchased. Residents' discounted license is $5 and non-residents' is $25.75 for the annual licenses.

Anglers who recruit new people into the sport can get rewarded for their efforts. Wisconsin residents who have been designated as a recruiter three or more times within one license year are eligible for a discount on the license of their choice the next year.

Buying a license is easy and convenient over the Internet through the Online Licensing Center on the DNR website at all authorized sales locations, or by calling toll-free 1-877-LICENSE (1-877-945-4236).