STEVENS POINT - An icon of natural area preservation in Wisconsin will be inducted into the prestigious Wisconsin Conservation Hall of Fame in a May 3 ceremony in Stevens Point.

Clifford E. Germain, 91, of Madison, is being honored for his distinguished career as the first ecologist and chief of the State Natural Areas program in the Department of Natural Resources. His efforts helped build the oldest and largest statewide nature preserve system in the United States. 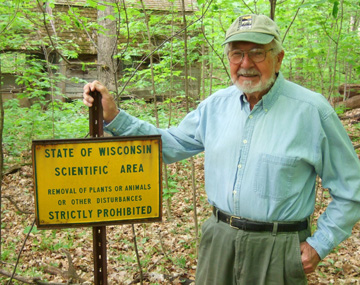 Germain joins 80 other notable conservation giants in the hall, among them John Muir, Warren Knowles and Aldo Leopold under whom he studied at the University of Wisconsin in the 1940s. Fellow inductees for 2014 include Jay Reed, longtime outdoors writer for the Milwaukee Journal and Journal Sentinel, and Bill Horvath, a land and water conservationist who helped create the Conservation Hall of Fame while also working professionally to protect wildlife, forests, and recreational opportunities on private and public lands throughout the nation.

Germain retired in 1985 after 37 years at DNR, where he guided the expansion of the State Natural Areas Program from 48 nature preserves when he was hired in 1966 to 211 sites when he left, and to 673 sites today. Among the treasured natural areas Germain helped protect are the Mississippi River bluff prairies of Rush Creek near Ferryville, the wetlands surrounding Lulu Lake in Waukesha County, and old-growth hemlock forests at Moose Lake near Mercer.

Erin Crain, director of DNR's Bureau of Natural Heritage Conservation, which houses the State Natural Areas Program, is delighted by Germain's recognition. "Induction into the Hall of Fame is truly a singular honor," she says. "Cliff leaves a legacy of protecting Wisconsin's very best natural areas and rare species habitats for future generations. This is a fitting tribute to his life's work of saving our natural heritage. " 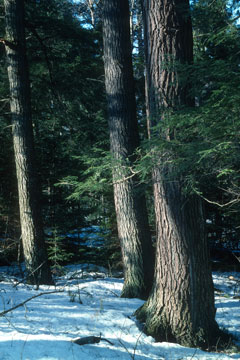 Germain was a founder of the Natural Areas Association and received the professional organization's first George Fell Award for lifetime achievement. He served on the board of trustees of The Nature Conservancy for many years and remains active in the work of the Audubon Society and other organizations. He was recognized in 2002 on the fiftieth anniversary of the State Natural Areas Program by having the Germain Hemlocks State Natural Area in Oneida County named in his honor.

The public is invited to attend the free induction ceremony at the Sentry Insurance Headquarters Theater, 1800 North Point Dr., in Stevens Point on May 3 beginning with a coffee reception at 9 a.m. and followed by the ceremony at 10 a.m. A buffet luncheon for $25 will follow the ceremony at the Holiday Inn and may be reserved by calling 715-346-4992.

The Wisconsin Conservation Hall of Fame (exit DNR) and Visitor Center, located at Schmeeckle Reserve in Stevens Point, was established in 1985 to advance the conservation legacy of Wisconsin and to recognize individuals who have contributed significantly to it. It is a cooperative venture of 20 statewide conservation organizations. Individuals may be nominated for induction by member organizations or the public; nominees are selected for induction by the hall's Board of Directors and an independent Board of Governors.

FOR MORE INFORMATION ABOUT THE HALL OF FAME AND OTHER INDUCTEES CONTACT: Joe Passineau, Wisconsin Conservation Hall of Fame, jpassine@uwsp.edu, 715-677-4047