Asks anglers to weigh in at Spring Fish & Wildlife Hearings

MADISON - Moving the start of the early trout season to January 1 and expanding the early season to all inland waters to provide more fishing opportunities are among the options Wisconsin anglers can weigh in on during the 2014 Spring Fish and Wildlife Hearings held April 14 at sites in all Wisconsin counties.

This hardy angler braved harsh weather to enjoy opening weekend of the 2014 early catch and release season --and was rewarded for his efforts.
WDNR Photo

The six advisory questions on trout topics, Spring hearings questionnaire questions 22-27 [PDF], are the latest step in a comprehensive review of trout fishing in Wisconsin launched in 2011. The questions are designed to help gauge support for possible season changes, one of many components under consideration as the Department of Natural Resources develops a rule package aimed at improving anglers' trout fishing experiences without jeopardizing the quality of the fishery.

"We are trying to provide more fishing opportunity for trout anglers," says Scot Stewart, the DNR fish supervisor leading the review effort. "At the same time we are trying to respect regional desires throughout the state. We are using the advisory questions to focus in on those desires."

Anglers also will get a chance to share their input during public informational meetings planned for summer 2014. Both will be used to shape a proposed trout regulation rule package for consideration at the 2015 Spring Fish & Wildlife Rule Hearings, Stewart says.

These public input opportunities are part of the statewide effort launched in 2011 to review inland trout fishing because it had been more than 25 years since DNR had collected angler input on a statewide basis, says Joanna Griffin, a fisheries specialist who leads DNR's trout team. Trout populations, trout streams, and trout angler habits and attitudes themselves had changed significantly over that time. Trout populations, for instance, increased overall on a statewide basis as has the number and mileage of trout streams, a story told in "A Trout Treasury" in the April 2011 Wisconsin Natural Resources magazine.

To get that initial input, DNR held public meetings in March 2011, conducted an online survey, and followed with a mail survey of former anglers to understand why they left the sport Results of the 2011 Survey of Lapsed Wisconsin Inland Trout Anglers [PDF, 341KB] .

Results from a mail survey of current inland trout anglers sent in February 2012 is now being finalized. That survey was sent to 1,000 randomly-selected purchasers of the 2011 inland trout stamp. In early 2013, DNR formed a Trout Management Task Force to review the survey results, provide input, and develop goals for the future of Wisconsin's trout fisheries. The group included 40 people from around Wisconsin who represent the Conservation Congress, conservation organizations, and businesses and fishing guides with an interest in trout fishing.

Based on the task force's input, DNR's trout team put together the advisory questions related to season changes, says Griffin.

The advisory questions, in addition to moving up the opening day of the early trout season, ask whether the season should be statewide. Right now, much of northeastern Wisconsin and selected waters elsewhere are closed during the early season. Other questions ask whether the early season should end the day before the regular season begins, eliminating the five-day closure now in place between the two seasons.

Anglers are also asked if they want to extend the regular season to Oct. 15 from Sept. 31, as it is now, with options of making the extra two weeks open to harvest or to catch and release only, Griffin says.

Finally, anglers are asked if they favor a uniform gamefish season for so-called put-and-take trout lakes and ponds, where catchable size fish are stocked every spring but where the lakes and ponds may not support survival over winter.

Anglers and others with question about the trout advisory questions or the surveys are invited to join DNR for an online chat at noon March 13. People who can't join at that time can read the transcript later at their convenience.

To participate, visit dnr.wi.gov, and look for the box on the right to enter the chat, or search the phrase "ask the experts." Or join the conversation on the DNR Facebook page, www.facebook.com/WIDNR, by clicking the "Cover it Live Chat" box on the top of the page. The transcript will be available after the chat at that same link.

Joanna Griffin, a fisheries specialist for DNR since 2000, is taking over as statewide trout coordinator for the fisheries program, a role vacant since the 2011 retirement of Larry Claggett. 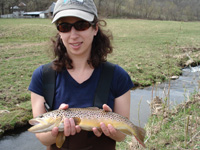 "Joanna Griffin has been accomplishing great things for the trout program: organizing and writing the Trout Stamp Reports, coordinating the report database for trout habitat projects, and serving as the liaison to the trout team," says Steve Hewett, fisheries management section chief. "We look forward to her leadership and coordination skills to help us forge ahead with our trout review and continue to provide some of the best trout fishing in the country."

Griffin, who grew up in southern Vermont, graduated from Vassar College and completed her graduate studies in Woods Hole, Mass., through the Boston University Marine Program. She worked for two years at Marine Research, Inc., an environmental consulting firm in Falmouth, Mass., before joining DNR in 2000 as the assistant propagation coordinator.

Since 2001, Griffin has had multiple project positions with DNR fisheries management and the University of Wisconsin-Stevens Point. In 2011, she became a staff specialist working on a panfish management plan, trout habitat reporting and trout stream classification. Griffin lives in Madison with her husband and two children, all accomplished anglers.