GREEN BAY - With the deep freeze thawing this weekend, ice fishing pressure for lake whitefish is expected to pick up again as anglers enjoy a resurgent fishery made possible in part by cleanups that have improved water quality and habitat. 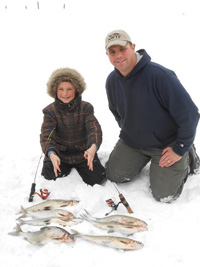 Winter creel data for Green Bay shows a growing number of anglers fishing for lake whitefish and a significant increase in the number they caught and harvested.
WDNR Photo

"We have some fairly strong year classes of younger fish on the doorstep, and documentation of spawning populations in the tributaries on the western shore, so the future looks good for the lake whitefish fishery in Green Bay," says Scott Hansen, Department of Natural Resources fisheries biologist stationed in Sturgeon Bay.

For the first time in decades, DNR fisheries crews in November 2013 documented spawning condition whitefish in the Fox, Peshtigo, and Oconto rivers. Until now, they had only been documented in the Menominee River.

"These recently emerging west shore tributary spawning populations are probably contributing a lot to the fishery and we are just beginning to understand their life histories.," Hansen says. "We're hopeful they'll sustain the bay ice fishery for a long time."

The whitefish sport fishery came on quickly; harvest rates in 2007 were one-one hundredth of what they were in 2013. [link to PDF with harvest rates] Hansen says it's difficult to point to a clear cause to explain the growing fishery, but that a couple theories exist and they may be synergistic.

First, there has been a re-colonization of the Menominee River population of whitefish, more than a century after huge runs of the fish dried up. "The river is a cleaner place than when lake whitefish were extirpated back in the late 1800s and the fishing is regulated so overfishing isn't an issue," Hansen says. "Fish populations in general have responded to those beneficial changes."

Federal Clean Water Act regulations that limited pollutants allowed in discharges into the bay and its tributaries have helped improve waters since the 1970s, and in more recent years, efforts by federal, state and local governments working with citizen groups and businesses to remove contaminated sediments and improve habitats in the Menominee River are paying off, as recounted in "Healing the Lower Menominee River" in the August issue of Wisconsin Natural Resources magazine.

Also, because whitefish as a whole on Lake Michigan have been in a rebuilding phase over the last 10 to15 years, this population probably originated from whitefish straying from adjacent stocks during the November spawning period-- the Big Bay de Noc stock (Upper Michigan) or North Moonlight Bay stock (east of Door County). Some genetic analysis that's been done by University of Wisconsin-Stevens Point has supported this to a certain extent though the data demonstrated a mixture of several whitefish stocks contributing to the Menominee River population, Hansen says.

Back in the mid-1990s a few whitefish were discovered in the river in fall brown trout surveys. By the mid-2000s the run had grown substantially and tagging efforts indicate these fish are contributing to the winter sport fishery; 2003 looks to have been a big year class for whitefish recruiting from the Menominee River.

The strength of the Green Bay lake whitefish fishery also may reflect the species' search for new sources of food as the levels of Diporeia, the preferred food of lake whitefish, have declined dramatically throughout Lake Michigan. Whitefish size-at-age has declined significantly over the past 10- 15 years as a result of this lost food source and is compounded by their increased abundance. 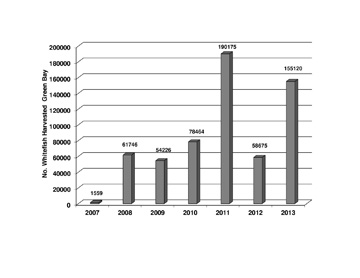 "The preponderance of whitefish in Green Bay in the winter may in part be a result of the fish looking for food. The decreased body condition reflects the diminished preferred food source and therefore hungrier fish may simply be more apt to bite on hook and line," Hansen says. "It appears a primary food source, among available forage fish in Green Bay, is round gobies, although we don't know that the gobies are necessarily more abundant in Green Bay than other parts of Lake Michigan."

This phenomenon somewhat contradicts lake whitefish foraging habits as they are not known to be a primarily piscivorous (fish eating) species. Furthermore, DNR's tagging study suggests that lake whitefish from the Menominee River do not migrate out of Green Bay so these fish may just be taking advantage of food that is most available to them in their home range.

Round gobies are an invasive, bottom dwelling fish that is an aggressive, voracious feeder and has taken over prime spawning sites traditionally used by some native fish species.

Hansen says that documentation of the emerging west shore tributary spawning populations helps increase the likelihood that the whitefish fishery will continue, even as the Lake Michigan and Green Bay ecosystems continue to change.

"These emerging spawning populations are probably contributing a lot to the fishery and we are just beginning to understand what those fish do," he says. "Perhaps they'll sustain the Bay ice and commercial fisheries for a long time. Let's hope so."