LAKE GORDON, FOREST COUNTY - County staff over the weekend pulled by hand patches of an aggressive invasive species they found earlier that week in the Nicolet National Forest, illustrating a key side benefit emerging from a five-year effort led by the Department of Natural Resources to survey lakes statewide for aquatic invasive species. 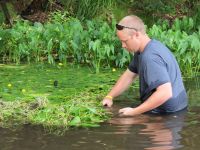 John Preuss wades in to pull out by hand an aggressive invasive plant found earlier in the week in Lake Gordon.

The surveys are allowing DNR staff, local partners and volunteers to identify early infestations of invasive species and, as they did Saturday with the yellow floating heart, take immediate steps to get rid of them before the invaders' populations have a chance to expand.

"The surveys are having an immediate benefit, as we saw with Lake Gordon," says Maureen Ferry, who is coordinating the survey for DNR. "We've had many instances where they've turned up new populations of invasive species that DNR and partners have been able to address immediately." 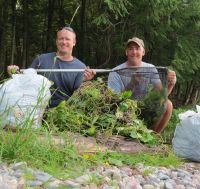 Statewide surveys are allowing county and state staff to respond quickly when a new population of invasive species is detected, as John Preuss, left, and Chris Hamerla, right, did with yellow floating heart.

Yellow floating heart is a concern because it can grow in dense patches, excluding native species, creating areas with low oxygen levels underneath the floating mats, and interfering with fishing, swimming and boating. The discovery last week of yellow floating heart in Lake Gordon is believed to be the first time the plant has been found in an inland Wisconsin lake; it had previously only been found in a few private ponds. Possession, sale, transfer and introduction of the species is illegal in Wisconsin without a permit.

Preuss returned to the lake Saturday with Chris Hamerla, AIS coordinator for the Golden Sands Resource Conservation and Development Council, and the two spent hours carefully pulling the plant from near a boat landing and campsite.

"We hand-pulled the two populations on Saturday and pulled a total of six-and-a half bags," Preuss says. "We took our time and believe we did a good job. We made sure to get the rhizome and did our best to make sure no pieces escaped. We made sure to get under the roots and get them out of the sediment."

Preuss will work with the U.S. Forest Service to monitor Lake Gordon and nearby lakes and increase awareness among campers of yellow floating heart.

Surveys to detect aquatic invasive species are taking place this summer on 200 randomly selected lakes with public access. The effort, funded through the federal Great Lakes Restoration Initiative, is the first of this scale in the United States and will result in more than half of Wisconsin's 1,600 lakes with public access being monitored for invasive species, says Ferry.

Monitoring includes people in boats doing a visual survey along the entire lakeshore, snorkeling at all boat launches and at "high risk" locations, raking up plants to see if Eurasian water-milfoil and other plant invaders are present, and dipping nets into the water to look for invasive waterfleas and juvenile zebra mussels.

Ferry says the surveys are ultimately aimed at helping DNR and partners know how widespread the different invasive species are and if the rate they are spreading is increasing, decreasing, or staying the same. Such information can better help direct prevention and control efforts in the future, she says.

Right now, though, the surveys are paying off by fostering a rapid response to new discoveries when they are often more easily and less expensively addressed.

Last summer, for instance, DNR staffer Matt Hager spotted just six strands of Eurasian water milfoil, a harmful non-native plant that chokes lakes and clogs propellers, as he boated and snorkeled slowly across the surface of North Lake in Florence County. He carefully hand pulled the plants for disposal before alerting the Spread Eagle Chain of Lakes Association. No new milfoil plants have been found so far in the 2013 surveys on North Lake. In addition, the Spread Eagle Chain of Lakes Association successfully applied for a Rapid Response Grant from the DNR that will allow them to monitor, map and hand pull any milfoil populations that may remain - as well as work with UWSP zebra mussel researchers on a long term adaptive management plan.

"The best part is when we've helped a community get the information and funds they need to keep a lake in good shape for their kids," Ferry says. "Boating, swimming, fishing and all."

Preliminary results from two years of surveys for aquatic invasive species have found some good news and some surprises, Ferry says. "The good news is many of the potentially most harmful invasive species, like zebra mussels, occupy a tiny fraction of those lakes that provide suitable habitat for them."

University of Wisconsin research shows that of the 15,000 lakes in Wisconsin, about 4,000 are suitable for zebra mussel. The surveys have shown that only 164 lakes are invaded by zebra mussels.

Likewise, spiny water fleas have only been found in six waters. And 70 percent of the lakes with public access surveyed were free of Eurasian water-milfoil, despite its being in Wisconsin for more than 50 years and being documented to damage waters with high levels of the plant, Ferry says.

"It's too early in our surveys to tell whether the spread of certain species is slowing, speeding up or staying the same, but findings like these are encouraging. We're also encouraged that 93 percent of boaters say they're taking the prevention steps, and encouraged by the fantastic interest and commitment among lake association members and other volunteers to help increase awareness of invasive species and the steps we can all take to avoid spreading them."

One surprise from the surveys thus far is that one particular aquatic invasive species, mystery snails, is more widespread than thought. Studies to date, however, have documented little ecological harm from mystery snails, so DNR and partners are trying to figure out how much of a concern this species is, Ferry says.

"What we do know, however, is that mystery snails do not belong in Wisconsin waters. Their discovery reminds us that there are lots of new invasive species with the potential to establish and spread in Wisconsin," she says. "So we need to be vigilant and make sure to prevent these species from becoming the next big problem species."

Visit the DNR's AIS web page to find out more about the distribution of AIS in Wisconsin.