CLEVELAND, OHIO - The cleanup of the lower Sheboygan River will be in the spotlight this week as scientists, conservationists, public officials and tribal leaders from the United States and Canada gather for the Great Lakes Commission meeting here to discuss the most pressing issues facing the five Great Lakes and to highlight recent successes.

Efforts to remove contaminated sediment and restore habitat in the Sheboygan River recently got a big boost with the federal government's announcement that it would target up to $50 million in Great Lakes Restoration Initiative funds for dredging and habitat restoration projects in the river. There are 31 U.S. Great Lakes Areas of Concern and the Sheboygan AOC is one of a few to be targeted for such priority funding and clean-up by the U.S. Environmental Protection Agency. 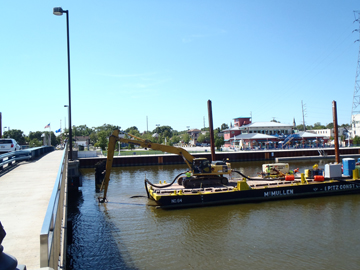 A dredging projects in the Sheboygan River received federal funding as part of the Great Lakes Restoration Initiative.
WDNR Photo

Steve Galarneau, who leads the Department of Natural Resources Office of the Great Lakes, is a speaker at EPA's session on designated Areas of Concern, those "toxic hot spots" along the Great Lakes where severe, historic pollution has degraded habitat and water quality and resulted in levels of environmental contaminants in fish and wildlife that make them unhealthy for people to eat.

Galarneau has been invited to share how Wisconsin partners worked together to place the Sheboygan Area of Concern in a strong position to secure the priority status and funding, which has allowed them to jumpstart a range of projects that when completed, will finish a transformation of the river and harbor area started more than 30 years ago.

"That federal GLRI funding is a game changer for the Sheboygan cleanup," Galarneau says. "The possibility of getting the kind of funding to fully restore the lower Sheboygan River galvanized everybody. Our partners worked hard to do what was needed and overcome obstacles to make it happen."

Some of the partners include the city of Sheboygan, Sheboygan County, EPA, DNR, the state Department of Transportation and the University of Wisconsin-Extension.

Galarneau hopes Wisconsin can use the same approach to secure federal money for cleanup of other contaminated harbors and rivers along its Great Lakes shorelines. In addition to the Sheboygan River, Wisconsin has four other areas designated in 1987 as Great Lakes Areas of Concern - as part of an international agreement between the U.S. and Canada known as the "Great Lakes Water Quality Agreement," and revised just last week.

The four other Areas of Concern in Wisconsin are: the St. Louis River on Lake Superior; and the Lower Menominee River; Lower Green Bay & Fox River, Sheboygan River; and Milwaukee Estuary on Lake Michigan. Work is underway now at all of those sites.

Although originally planned to start earlier in the summer, due to a variety of unanticipated contracting and funding issues, the project was delayed. The contractors plan to work up to 24 hours per day and up to seven days per week until December to complete these projects in 2012, according to Victor Pappas, DNR Lake Michigan field supervisor.

The dredging, and the silt curtains and bubble line erected at the 8th Street Bridge to prevent the downstream movement of contamination during dredging, may affect fishing at that spot this year and upstream but won't affect future fishing. DNR staff have evaluated the potential impacts and believe salmon and trout will still be able to move upstream to the first dam in Kohler, which is a permanent barrier to further movement. Furthermore, there is very little natural reproduction by Great Lakes trout and salmon in Wisconsin's tributaries and the department collects eggs from spawning fish making their runs at three egg collection facilities on the Root and Kewaunee rivers and Strawberry creek.

"These dredging projects are a once-in- a-lifetime opportunity to remove contamination in the Sheboygan River and restore the fishery along with recreational use," Pappas says. "The goal is that over time, we can remove the "do not eat" advice for resident fish so anglers can again safely enjoy eating their catch."

Altogether, the projects are expected to complete the Sheboygan River's transformation and allow it to ultimately be removed from the federal list of AOCs in the future. Re-vitalization of waterfront areas has occurred, including a 40-acre portion remediated and redeveloped with new restaurants, retail shops and condominiums, a new convention center and hotel-waterpark. Site restoration was achieved in part through DNR Remediation and Redevelopment funds.