Jill Jonas will serve a three-year term on the council, which provides practical and independent advice to the U.S. Environmental Protection Agency on matters and policies related to drinking water, including regulations and guidance required by the Safe Drinking Water Act. 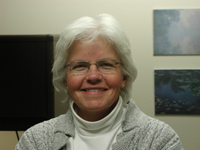 Jonas said her appointment is a reflection of all the work of the staff in Wisconsin and for the Department of Natural Resources drinking water program. "I am honored by, and excited about the opportunity to advise EPA on a national level regarding the Safe Drinking Water Act and also on issues overlapping other government agencies and the public."

Her appointment follows her service in 2011 as president of the Association of State Drinking Water Administrators, a group comprised of counterparts that lead safe drinking water programs in the other 49 states, U.S. territories, the Navajo Nation, and the District of Columbia.

In 2009, Jonas' served on the State-EPA Nutrient Innovations Task Group that concluded that the amount of phosphorus and nitrogen entering U.S. groundwater and surface waters has significantly escalated over the past 50 years, and now pose expanding water quality and public health concerns across the United States.

In Wisconsin, Jonas directs the state's drinking water and groundwater programs. DNR oversees the 11,439 public water supply systems in Wisconsin, which range from small restaurants and gas stations up to the largest cities such as Madison and Milwaukee. These systems have had an enviable track record of providing clean drinking water to their customers, with more than 96 percent meeting all health-based standards in 2011, the latest year for which figures are available.

Jonas' past professional experience includes assisting the former Soviet bloc countries of Latvia and Lithuania develop groundwater and drinking water regulations and source water protection strategies, along with assisting surrounding Baltic/European officials on water issues and laws. She holds a master's degree in natural resources with research in aquatic toxicology and a Bachelor of Science degree in education.