BABCOCK, Wis. -- The Sandhill Wildlife Area achieves its 50th anniversary this year, but its roots stretch back to drought-stricken1930 when devastating wildfires scorched a half million acres of already badly damaged land in central Wisconsin.

The drought and fire ravaged lands of Wood County lay in smoldering ruin. From these ashes would rise a grand and unique experiment, a vast refuge for waterfowl and upland birds and one of the nation's greatest outdoor laboratories - 9,150 acres of woods, wetlands and prairie enclosed by a deer-proof fence.

Friends of Sandhill will host a low-key celebration the evening of Saturday Sept. 8, with a rare opportunity for a 6 p.m. driving tour of the property's northern waterfowl refuge, covering more than 3,000 acres and featuring a 250-acre pen on a patch of uplands where buffalo roam. A small number of historic photos and artifacts will be on display at 7 p.m., and retired wildlife biologist John Kubisiak, a nationally recognized deer researcher, will talk about Sandhill's storied past beginning at 8 p.m.

Once a mix of wetlands, stands of oak and great pine forests, rich with wildlife, this part of the state was logged over after settlement and in the early 1900s its wetlands were ditched and drained in a failed effort to farm acidic soils.

By 1930, most of the farms had failed. It was the time of the Great Depression and the Dust Bowl. Across central Wisconsin, tax delinquent properties were falling into the ownership of bankrupt counties. It was, by many accounts, a wasteland.

In that same year, Wallace Grange, Wisconsin's first superintendent of game management, purchased nearly 2,000 acres of tax delinquent land for 77 cents an acre. Grange would later serve for two years with the U.S. Biological Survey, precursor to the U.S. Fish & Wildlife Service, but he was impatient with bureaucracy and his career in government was brief.

By 1937, Grange and his wife, Hazel, had acquired more than 7,000 acres of land, which they enclosed in a not-entirely deer-proof fence. They obtained licenses to operate a game farm for deer, upland game birds and furbearing mammals. An avid birder, Grange named it the Sandhill Game Farm because of his affection for the handful of sandhill cranes that visited the property during their annual migration.

There wasn't much for wildlife. Deer were scarce or entirely absent in many counties. There were no wild turkeys. Fishers and American martens had ceased to exist in Wisconsin and wolves were on their way out.

Dick Thiel a retired Department of Natural Resources wildlife educator, said the "new" idea behind game management back then was to establish game farms and "produce" animals that could be sold and distributed across the landscape.

But Grange, a pioneer of conservation science and a friend of famed naturalists Aldo Leopold and Sigurd Olson, possessed a curious and inventive mind, and he tinkered with ecology.

"He played with habitat inside that fence," said Thiel. "He manipulated the landscape to see how it affected vegetation and wildlife."

Grange sold live deer to states like Georgia, Mississippi, Florida and Louisiana that were trying to re-establish extirpated herds, and he sold field-dressed deer to fancy restaurants in New York where "exotic" foods like venison were all the rage.

By 1949, Sandhill had expanded to its current size of 9,150 acres. But as deer populations -- taking advantage of new growth forests -- expanded rapidly nationwide, business dwindled in the 1950s.

"He ran himself out of business," Thiel said.

In 1962, the Granges sold the Sandhill property to the state. The deed contained a provision that the 3,000 acre Gallagher marsh would be maintained as a preserve, barred to hunters, for the next 50 years.

"He wanted a quiet place for those migrating cranes," Thiel said. "Wallace loved cranes. He'd counted 200 cranes in the marsh and he was ecstatic. We now estimate that between 8,000 and 10,000 cranes visit Sandhill during peak migration."

Although the state is now free of that deed restriction, the property's recently updated master plan calls for the preserve to be maintained. Grange also insisted the state maintain the small herd of bison.

Management fell to the Wisconsin Conservation Department (which would become the Department of Natural Resources later in the decade) whose managers and biologists were thrilled about the potential offered by 14.5 square miles of wildlife habitat enclosed by a deer-proof fence, which they immediately rebuilt.

Browse surveys started in 1963 to analyze how deer affected ground level vegetation. More formal research began in 1966. Deer management then, as now, was controversial. For the first time, scientists had an opportunity in a controlled environment to study the interaction between deer and grouse, their habitats and the hunters that pursued them.

"A major feature of Sandhill was having a known number of deer, grouse and hunters," said deer researcher John Kubisiak. "We could study the relationship between hunter effort and the harvest. That's really hard to do on the open landscape."

Not that it was easy inside the fence. For years, biologists conducted intensive spring surveys of drumming grouse and followed deer hunts with grid searches for dead deer (to determine wounding mortality and other statistical factors) regardless of weather. The mosquitos were ferocious in the marsh.

"You'd be walking in the marsh and hit a log and go down head first and a swarm of bees would come out of the log," Kubisiak said. "We'd come back in looking like drowned rats. Part of our work was being able to withstand the elements."

DNR research into deer management at Sandhill was conducted from 1966 to 1989 and it led to management strategies employed across North America. It was at Sandhill that the emerging philosophy of "variable deer management" (managing deer within prescribed deer management units rather than applying one set of quotas and rules across the entire state) was validated.

Deer hunting with high-caliber handguns was first tested at Sandhill as was hunting with muzzleloaders and trophy deer management. University of Wisconsin researchers led by Tom Heberlein studied hunter satisfaction. Researchers determined that hunters begin to feel crowded when their density exceeds 23 hunters per square mile of deer range. 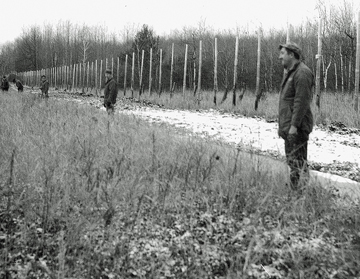 This photograph, taken either in the late 1960s, or perhaps in 1972, shows searchers lining up along the old, 9-foot deer fence to perform a grid search for any unrecovered dead deer at the Sandhill Wildlife Area following a gun deer hunt.
WDNR Photo

In 1972, an effort was made to eliminate all deer on the property, in part to test deer population estimates, but also to determine if it could be done. While the hunt was scheduled to last more than 40 days, it took hunters less than 30 to harvest all 591 deer on the property. Biologists had estimated a population of 600 to 650 deer.

In 1991, the Outdoor Skills Center was opened and intense training was offered to young hunters and first-time adult hunters. A full weekend of outdoors skill training was followed after several weeks by a two-day hunt with hunters assigned to one of four quadrants and each hunter accompanied by a skilled and unarmed mentor.

Other educational programs were developed and Sandhill, which has dorms for students, is still used for research by university students and others.

The 9-foot-high fence surrounding Sandhill was recently rebuilt, reaffirming the DNR's commitment to this unique resource.

"It's been a tremendous asset," said Thiel. "It's a special place and it was an honor for me to work there."

Resources: While Sandhill is unique it is not alone. There are 178 state wildlife areas scattered around the state encompassing more than 590,000 acres. All are managed by the DNR to sustain wildlife and natural communities and to provide a full range of recreational uses including hunting, fishing, trapping, hiking, nature study and berry picking. For more information, including maps, can be found on the wildlife management area pages of the DNR website.