FISHING IN THE NEIGHBORHOOD PROGRAM REELS IN NEW ANGLERS 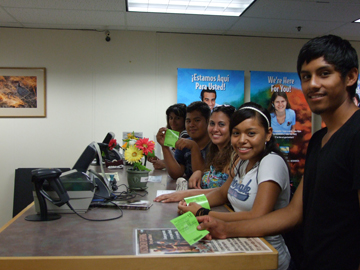 "Our goals are to welcome new people into the community of anglers, to help them establish a relationship with the resource and adopt Wisconsin's tradition of stewardship," says Theresa Stabo, Department of Natural Resources aquatic resources education director. "We're very excited that our Fishing in the Neighborhood program is growing and that partner groups are getting important recognition and funding to expand their local efforts."

Centro Hispano of Dane County, one of the partnering groups, recently received a $30,000 grant from the national Recreational Boating and Fishing Foundation (exit DNR) for its bilingual fishing club, Club de Pesca.

Centro Hispano Executive Director Kent Craig says the organization is very excited about the national grant and the ongoing relationship with DNR and other program partners. "What we're hoping is to see young people get more opportunity to spend time on water fishing and learning more science," he says. "In addition to expanding the program, we're hoping to develop a replicable, culturally competent curriculum for offering fishing clubs in Latino communities."

DNR has long trained volunteer instructors in how to start their own fishing clubs for youngsters and others new to fishing. In recent years, DNR has focused more attention on working with partners to help start fishing clubs within minority communities, as was successfully done at the Urban Ecology Center in Milwaukee and the Boys & Girls Club in Madison.

This year, DNR has provided angler education training to college interns and is paying them stipends to work with five different youth organizations that serve low-income people of color. Andrea "Tess" Arenas at the UW-Madison Office of Service Learning and Community Based Research recruited the interns and identified organizations willing to partner with the state and supervise the interns. 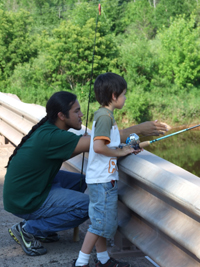 A youngster and an intern try their luck during a fishing club offered by the Bad River Band of the Lake Superior Tribe in Odanah, DNR and other partners.
WDNR Photo

DNR is providing fishing equipment for the interns to use with the youngsters. The interns recruit members for the clubs, instruct the youngsters in basic fishing techniques, set up fishing trips and bring in guest speakers to talk to the participants about aquatic resources topics. In addition to a stipend, they earn college credit for their work.

DNR pays for the costs of the clubs through the Sport Fish Restoration money it receives from the federal government from an excise tax on the sale of fishing equipment. Madison South Rotary Foundation provided additional funding for the Madison groups. It's welcome seed money, says Centro Hispano's Craig.

"We wouldn't have a program without the DNR," he says. "Getting the national RBFF grant shows it was a wise investment."

Stabo says that DNR's Fishing in the Neighborhood initiative recognizes that Latino and Hmong immigrants represent the fast-growing segments of Wisconsin's population. "We want club members and their families to see fishing as a good choice for weekend or afterschool activities, once summer ends and everyone is back at school."

Club de Pesca shows how the program seeks to make fishing a good choice by tailoring it to a specific culture. "Having a program which is free, based at a known agency and run by bilingual staff makes fishing much more accessible to the Latino community," says Jannet Arenas, the intern who is leading the Centro Hispano program.

Another way Club de Pesca fits with the Latino culture is relying on older Latino high school students to teach younger kids how to fish. The older "Fishing Buddies" are paired up with younger students and serve as their coaches during outings. In return, the older students get community service hours.

"Right now, the club meets twice a week and for the first session consists of 25 anglers ages 6-9," Jannet Arenas says. "So far we have fished at Tenney Park, Vilas Park and Jenny & Kyle Preserve in the Madison area. The last week of the first session features a visit to the local fish hatchery. The next session will be for kids ages 10-13. Both sessions conclude with a graduation in which the participants receive their own fishing rod/reel and parents are invited."

Jannet Arenas says the national RBFF grant - layered on top of the financial and training support DNR has continued to provide -- has allowed her to get more kids out fishing and to provide them transportation directly to the fishing sites. Last year, club members took the city bus and walked to their fishing spots.

"The participants' feedback has been great -- the kids always show up excited to go fishing," she says. "My favorite part of fishing club is seeing the kids' excitement when they catch their very first fish. It is a priceless moment and one that I feel blessed to be part of."

Organizations interested in learning more about how to start a fishing club for new anglers, including Latino and Hmong organizations can contact Theresa Stabo at 608-266-2272.