A DECADE OF PROGRESS TO PREVENT, CONTROL AND CONTAIN INVASIVE SPECIES

EDITOR'S NOTE: June is Invasive Species Awareness Month (exit DNR). To learn more about invasive species, special events and ways to get involved locally, go to the DNR website and search for invasives.


MADISON - A decade after lawmakers recognized in statute the threat that invasive, nonnative plant and animal species pose to the environment, economy and quality of life, Wisconsin has increased awareness, adopted comprehensive regulations and built partnerships to try to prevent the invaders from getting introduced or spread within the state, state natural resources officials say.

"Wisconsin has made a lot of progress on many fronts," says Department of Natural Resources Secretary Cathy Stepp. "We've made important gains in increasing public awareness, in preventing the spread of invasive species already here, and in building the capacity to quickly detect and control new invaders.

"Most importantly, we've worked hard to keep our native ecosystems healthy and to build the cooperation, partnerships and volunteer networks crucial to prevent, contain and control these threats to our natural resources and our economy," she says. "There is still more work to be done but Wisconsin has a lot to be proud of." 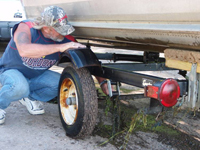 More than 90 percent of Wisconsin boaters say they remove invasive plants from boats and trailers before leaving a landing.
WDNR Photo

The result of such work is seen in statistics like these: 20 years after zebra mussels were found in Wisconsin's Lake Michigan harbors, less than 3 percent of lakes suitable for zebra mussels have them; two-thirds of lakes with public access are free of Eurasian water-milfoil and zebra mussels; and more than 90 percent of boaters and anglers say they take steps to prevent the spread of aquatic invasive species.

Or stats like these: DNR and partners have identified 59 species of terrestrial invasive plants that are not yet widespread or are not yet in the state and hundreds of trained volunteers are actively looking for these plants so they can be eradicated once they are found; 93 percent of campers in a 2010 survey said that stopping the use of firewood at a state campground from outside a 25-mile radius to prevent the potential spread of forest pests was important, and 85 percent said they comply with firewood laws at state parks and forests, up from 73 percent just two years earlier.

Kelly Kearns, a DNR conservation biologist who has worked for more than 20 years on terrestrial invasive species issues, says that invasive species remain a serious and growing threat due to increased global trade and climate change that allows more invasive species to survive Wisconsin winters. "More people are looking for invasive species so they're being found more frequently."

The good news, says Kearns and Jeff Bode, who has led Wisconsin's lakes and aquatic invasive species efforts for the past 20 years, is that Wisconsin is slowing the spread of some species and is in a better position to prevent future invaders from getting established than in 2002, when lawmakers passed a law to create an advisory council to help guide state policy.

Comprehensive rules are now in place to help prevent more invasive species being introduced. Wisconsin's Invasive Species Rule now regulates the sale, transport, possession and introduction of listed invasive species. DNR's ballast water regulations require vessels arriving in Wisconsin ports to use best management practices including exchanging or flushing ballast water in the ocean before entering the Great Lakes, a practice that nationally has helped cut to zero the number of new invasive species documented to have arrived in the Great Lakes via ballast water. And a suite of laws has been enacted to prevent boaters, anglers and other water users from accidentally spreading invasive species and fish diseases from lake to lake, Bode says.

Kearns says that education efforts by government agencies, local conservation groups and lake associations, educators and individuals have helped greatly increase awareness about the problems caused by invasive plants, aquatic invasive species and forest pests. Knowledge is especially high among specific groups such as park visitors, gardeners, rural landowners, and boaters and anglers of the steps they can take to prevent accidentally spreading a host of invasive species, Bode and Kearns say.

Best Management Practices, or BMPs, to prevent the spread of invasives are in place and well utilized by some industries, such as forestry and utility companies, Kearns says. "Many roadside managers are adjusting their mowing schedules to cut back the weeds before they begin to produce seed, thereby minimizing the spread of seed," she says.

Hikers, mountain bikers, off-road vehicle users and others who play in Wisconsin's public lands are learning to clean off their gear before and after visiting an area to avoid inadvertently carrying pests or seeds from one area to another, she says. And campers and cabin owners are cooperating with efforts to avoid moving firewood and the pests that it may be harboring.

The nursery and landscape industry is helping by recognizing plants that are overly aggressive and eliminating them from their plantings and sales yards. "In general, people are understanding that they can be part of the solution by doing their part to avoid spreading invasives," Kearns says.

Perhaps the most encouraging development over the past decade, she says, is the legion of volunteers who have mobilized to pull literally tons of garlic mustard from forests they care about; have been trained as "weed watchers" to look for, identify and report new populations of invasives in their area; have raised and released biocontrol beetles that feed only on the invasive plant purple loosestrife, and who have spent countless weekend hours at boat landings, helping educate boaters about the steps they need to take to prevent accidentally spreading Eurasian water-milfoil and other invasive species to new waters.

"It is on-the-ground efforts such as these that will be critical to maintain our biodiversity and prevent invasive species from harming Wisconsin's environment and economy," she says.