GRANT BOOSTS INVESTIGATIONS INTO WHY BASS ARE BOOMING, WALLEYE WANING IN SOME LAKES

MADISON - Work to help understand and respond to why bass are booming and walleye waning in many northwestern Wisconsin lakes just got a big boost.

A consortium of researchers and fisheries biologists from the University of Wisconsin's Madison and Stevens Point campuses and the Department of Natural Resources have received a $760,000 federal grant over five years to help investigate the shifting fish populations and tease out the most likely reasons behind the shift. 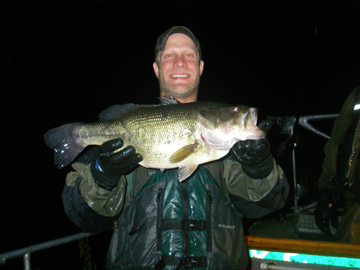 "We're excited to have a large-scale, collaborative research project underway to tackle our key questions and help inform our management decisions," says Jon Hansen, one of the DNR fish biologists involved in the study and leader of DNR's bass committee.

"The issue is very complicated, and identifying the causes of these changes requires various approaches and the expertise that the different partners bring to the table."

Says Steve Carpenter, a UW-Madison limnologist and a principal investigator in the study, "At this point, we have nothing but hypotheses. Now we can get to work on gathering real information and figuring out which of the many hypotheses might be right."

The grant is funded by the U.S. Geological Survey and will be led at UW-Madison by Carpenter, at Stevens Point by Dan Isermann, and at the DNR by a team of DNR Bureau of Science Services researchers and Fisheries Management biologists.

The work will build on, and draw data from, ongoing state efforts to adjust bass and walleye fishing regulations and attempt to determine how much anglers affect these populations. Bass are the fish Wisconsin anglers reported releasing most often in a 2006-07 statewide mail survey, with only 5.4 percent of bass harvested, while 30 percent of all walleye were harvested.

"These traditional approaches (changing regulations and collecting data) are important to do, but if that is all we did, we've never be able to figure out what this is happening," says John Lyons, the DNR fisheries researcher who assembled the collaborative research team. "We'd still be speculating. What this study will do is not necessarily provide the solution, but it will narrow down the explanations from 10 plausible reasons to two or three that are highly plausible, and which of our management tools could work."

Work underway and more to start this summer

Bass populations in some waters historically managed for walleye are at historic highs while adult walleye populations are dropping in these lakes and natural reproduction is sputtering. The stocking of small fingerling walleye is not as successful as in the past.

Starting in 2011, DNR adjusted regulations in many of these waters, including removing minimum bass length limits on 21 northwestern lakes and increasing minimum walleye length limits and doing the same this year on lakes in the Minocqua chain.

Those waters are being carefully monitored to see how the fish populations and anglers are responding, but the changes in regulations alone and the data collection wasn't going to be enough.

"We felt there was a need to take a closer look at the interaction between bass and walleye, and to assess what fisheries management options were viable and available," says Jake Vander Zanden, a UW-Madison zoology professor who will be working on the project. "We're also considering whether bass-walleye interactions are likely to be affected by our changing climate and water levels."

UW climatologists who have analyzed weather data collected in the last 50 years have documented that winters in northwestern Wisconsin have warmed as much as 4.5 degrees Fahrenheit.

The partners will be working on different aspects of the study, with DNR and UWSP researchers conducting field studies and feeding the information into a sophisticated modeling effort at UW-Madison.

Some of the work will begin this summer when Isermann and graduate students conduct fish surveys to estimate the size and age of largemouth bass in Lac Courte Oreilles, Big Sissabagama, and Teal Lakes near Hayward. "The information will be used to simulate the potential effects of different fishing regulations on largemouth bass populations," he says.

Isermann's team also will be collecting information on the diets of all the largemouth bass and walleyes they are collecting, flushing the content of the fishes' stomachs and then releasing the fish live back into the water.

Later in the summer, Isermann and his crew also will also collect largemouth bass hatched this spring and use daily ring counts from otoliths (fish ear bones) to determine hatch dates. The goal is to determine how climatic conditions influence largemouth bass hatch timing and whether potential differences in hatch timing could explain fluctuations in adult black bass abundance, Isermann says.

"This is a great collaborative effort among DNR, the Center for Limnology at UW-Madison and the Fisheries Analysis Center at UWSP and the Wisconsin Cooperative Fishery Research Unit," Isermann says.

DNR brought the groups together as a team to apply for grant funding and has provided funding to help answer some of the research questions the team is tackling. DNR staff also have assisted with sampling design and lake selection, and the staff of the Hayward DNR office has provided in-the-field support over the last few weeks of sampling, Isermann says. Results from the collaborative study are expected in 2014.

More information on bass and walleye can be found in the Wisconsin Natural Resources magazine article "Sustaining a fishery or fighting natural change?."