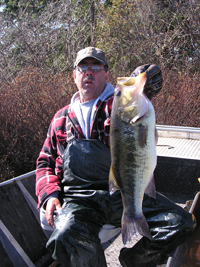 "Even though we had one of the earliest ice-outs in history for this area, steady and cool water temperatures persisted through mid-May, slowing the timing of bass spawning to near-normal," says Mike Vogelsang, Department of Natural Resources fisheries supervisor in Woodruff.

Bass will be done spawning by the harvest season around the Woodruff area, he says, "so expect fish to be off the nests and a bit more difficult to target. Don't let that stop you for trying for them, however, since bass are one of the easier fish to catch during summer."

Vogelsang advises anglers to look for smallmouth bass on rock bars in open water, cruising rocky shorelines, or holding tight to woody cover. "Live bait is always a great option, with jigs and leech combinations working well. Plastic baits such as crawfish colored tube jigs are excellent too because they simulate one of their favorite prey items...the crayfish. They are almost always rigged 'weedless' too, so you can pitch them into tight spaces and not worry about getting snagged as much."

Vogelsang's counterpart in Hayward, Dave Neuswanger, also marvels at what he calls "the earliest, most on-again, off-again bass spawning season" in his 10 years in Hayward.

"The water will warm, the male bass will come into the shallows and build some nests, and then frequent cold fronts will send them sulking back offshore," he says. As of May 22, bass have done some spawning in only the warmest, shallowest lakes in the Hayward area. Many female largemouth and most female smallmouth were still full of eggs.

"This is what we should expect at a time when spring-time water temperatures are rising faster than ever into the upper 50s when bass feel the urge to nest," Neuswanger says. "More 'false starts' seem likely under this scenario, and we can expect to see a wider range of dates at which bass spawn, starting much earlier than even a decade ago when most bass did not spawn in northern Wisconsin until early June."

Neuswanger says that this year, if the weather stays stable, he expects almost all bass nesting, spawning, and male brood guarding to be completed weeks before the June 16 harvest opener in the Hayward area.

"Fish have moved into the shallows during periods of warm days and then offshore into deeper water during cool evenings or cold snaps. However, the bite has been consistent lately and has picked up within the last few weeks. Anglers are catching fish on live-bait suspended below a bobber and on plastics fished in and around spawning flats. On colder days or when storm fronts are moving through, fish can be caught in deeper channels or congregating around offshore structure using lipless crankbaits or deeper artificial presentations."

Mike Donofrio, a fisheries supervisor based in Peshtigo and whose waters include those in Oconto and Marinette counties, says bass populations are in good shape for anglers in that area, based on what DNR crews saw during spring fish surveys. "It seems like any water we go into we find nice bass - both size and population-wise."

He advises anglers that there are very nice largemouth populations on the flowages on the Peshtigo system, and says Cauldron Falls and High Falls are the best bets.

On the Menominee River system, there are 11 dams and anglers "could go to any one of the impoundments created by those dams and catch a lot of legal-sized smallmouth bass." 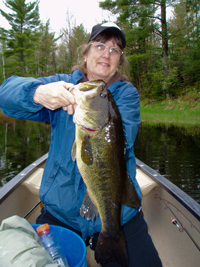 "I'd like to encourage people to start harvesting these bass. So many of the anglers are practicing catch and release and we have a lot of stockpiled big bass. Eat a bass and enjoy it, especially a smaller one."

Find more tips and tactics for fishing for bass in "Bassin' basics," in the Wisconsin Natural Resources magazine.

New regulations for some waters

The northern bass zone essentially includes those waters north of Highway 64 and 77 and allows harvest from June 16, 2012, through March 3, 2013. People can keep five bass in total, and the minimum length limit is 14 inches unless special regulations apply, so check the 2012-13 Guide to Wisconsin Hook and Line Fishing Regulations or search for regulations on your favorite lake using DNR's new online fishing regulations tool.

New this year, the minimum length limit for bass has been removed on most waters in Washburn and Burnett counties. There are a few exceptions.

"The reason we've removed the minimum length limit is in those two counties there is a widespread abundance of bass affecting bass growth rates," says Steve Avelallemant, fisheries supervisor for northern Wisconsin. "We need to thin them out a bit so the growth rates get back to where they should be."