Fawns are left hidden for protection; mom is often nearby

EDITOR'S ADVISORY: - An audio public service announcement on leaving wildlife in the wild is available in MP3 format for downloading.

MADISON - Reports have begun to come in from across Wisconsin that the first fawns of the year have begun to be born in the wild, and state wildlife officials are reminding people that fawns left unattended are not orphaned or abandoned. 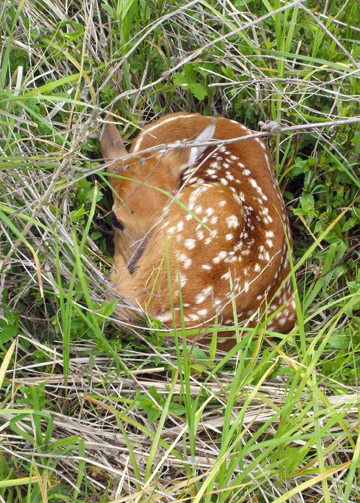 A newborn fawn lies curled up and motionless in a tuft of grass next to a trout stream in Vernon County. The tiny fawn, perhaps a week old, is well camouflaged and has virtually no scent, which helps protect it from predators. It's survival technique during the first weeks of life is to remain perfectly still until its mother returns. The doe was likely foraging nearby when it detected the far off approach of a human and took cover.
DNR Photo by Ed Culhane

Department of Natural Resources wildlife biologists say that unlike humans, one way animals protect their offspring is to conceal them from predators in natural vegetation.

A well-intended person may attempt to rescue or to feed a wild baby animal because, they think the baby is afraid, alone and abandoned, said Amanda Cyr, DNR wildlife biologist.

"It usually is not. Its mother is following natural behavior instincts to help the babies survive and thrive," Cyr says. "Human interventions, while done with good intentions, instead can damage the health and well-being of the baby animal."

Too much human or domestic animal disturbance or activity near a baby animal also could cause the mother to shy away from the area. Cyr also advises to keep a close watch on pets so they don't disturb a nest of baby animals.

"Fawns have little scent to attract a predator and their spots help them blend in to the environment," she says. "They move very little in their first weeks while they are alone in a place the mother selected. If you see a fawn lying on the ground by itself, you should leave the fawn where it is and not disrupt the area."

Baby rabbits also are usually alone in their nest during the day when the mother is not there. The baby rabbit's best protection from predators is to remain in their nest which is concealed with grass or vegetation.

"The mother will come back to the nest in the morning and evening to feed the babies," Cyr said.

"If you find a baby wild animal, the best policy is to leave them alone."

What is the law on assisting wildlife?

State and federal laws prohibit the possession of live native wild animals without a license or permit from the Wisconsin Department of Natural Resources or the U.S. Fish and Wildlife Service (USFWS). A permit from the USFWS is required to possess all native birds protected under the Migratory Bird Treaty Act. A few species are allowed to be possessed without a license, but the take of these species must be from a legal source.

If it is absolutely necessary to help a young animal that is injured or its mother has been killed, a person may legally have the animal in their possession for up to 24 hours for the purpose of transporting the animal to a licensed wildlife rehabilitator.