Recovered from spawning, fish "ready to chase just about anything" 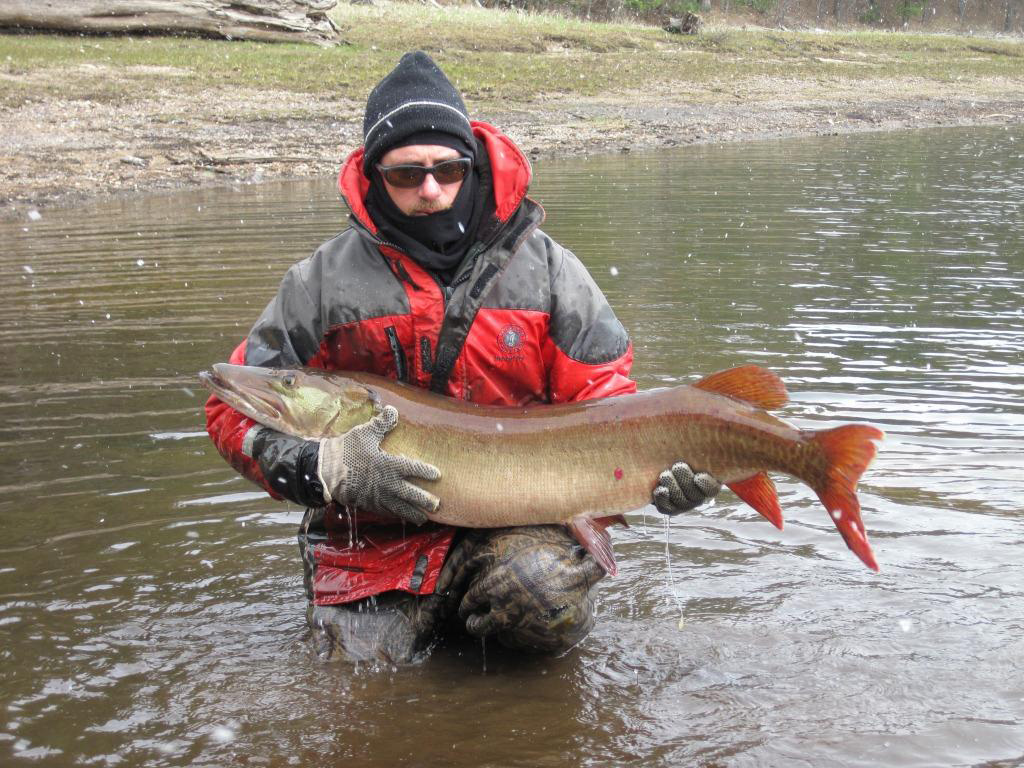 "The start of the 2012 northern musky fishing season should be timed perfectly with an increase in fish activity now that water temperatures have warmed into the mid- to upper 60s throughout most of northern Wisconsin," says Dave Neuswanger, Department of Natural Resources fisheries supervisor based in Hayward.

"Most muskellunge completed their annual spawning ritual weeks ago during an early warming period, so they have long since recovered and will be ready to chase just about anything that moves!"

Neuswanger says that jerk baits and even spinners with bucktails should provide good action. "Anglers will find healthy musky populations in traditional waters, but do not overlook some of the smaller, out-of-the-way lakes and streams that often have surprising numbers of fish between 36 and 44 inches long," he says.

Fish in these waters tend to be more naïve than those in heavily pressured lakes, so they are more likely to be encountered and caught. Multiple-fish days on some of the less-pressured lakes and streams are not uncommon. "Also, this is the time of year when anglers targeting bass with spinner baits are subject to surprise attack by muskies, so using a wire leader and keeping some hook-out tools and gloves in the boat are good ideas," Neuswanger says.

Mike Vogelsang, fisheries supervisor based in Woodruff, reports that musky in his area spawned at least two weeks ahead of "normal," with the peak right around mid-April.

"Water temperatures have been steady and cold for several weeks now, but they are finally beginning to moderate a bit, a trend that should continue through the musky opener. That will make the musky active. Look for them near newly emerged weeds with deeper water nearby -- the transition from weeds to deep water on the edges of bays are key spots."

Weedy open flats that are 5 to 9 feet deep also make for nice "drifts" while casting, Vogelsang says. "Early in the season anglers may also want to scale down the size of their baits a bit -- it's not always necessary to throw those big tandem bucktails or 12-inch jerk baits. For the first couple weeks of musky fishing, smaller bucktails and 6-inch twitch baits can work equally well if not better.

Terry Margenau, fisheries supervisor stationed in Spooner, says that now is an exciting time to be a musky angler in Wisconsin. "Twenty-five years ago our musky populations were growing in numbers but many fish were mid-sized, or 32-36 inches long. However, with the continued practice of live release by sport anglers and more restrictive regulations, there has been a shift toward more larger fish -- what the musky angler wants."

That growing catch-and-release ethic has made a big difference that anglers this year will enjoy, he says. "Over the past several years our crews are seeing more and more 30-plus pound fish in our nets, not to mention that occasional 40 pounder and larger. Some of our populations in the north have more than 50 percent of the adult musky population over 40 inches.

"This is an exciting time to be a musky angler in Wisconsin -- expect some big things with a little hard work in 2012!"

Anglers can rely on the new version of an old "friend" -- the 2012 version of the Wisconsin Muskellunge Waters book [PDF] -- to help lead them to the waters offering the potential to catch a monster musky or the prospect of lots of action.

The 35-page booklet is available online and can be downloaded and printed off. Hard copy versions are available by contacting a local DNR service center and asking for a copy of publication FH 515 (2012).

The printing of the booklet was paid for by the Musky Clubs Alliance of Wisconsin, along with its individual member clubs. Funding was also provided by the Federal Aid in Sport Fish Restoration program.

Tim Simonson, the DNR fish biologist who chairs DNR's musky committee and edited the book, says the update is the first since 1996. Some smaller, minor lakes have been taken off the list of musky waters as well as some lakes that had been stocked in the past but hadn't produced fisheries.

The book also updates the status of waters as far as whether they are Class A, the premier musky waters providing the best musky fishing, Class B, waters that provide good fishing, or Class C, waters with musky present but not of major importance to the overall fishery.

About 47 percent of the 667 classified musky lakes in Wisconsin are Class A Waters and 29 of the 100 classified river segments are Class A.

"By all measures, musky fishing has continued to improve," Simonson says. "The percentage of large fish -- over 45 inches continues to increase in our sampling surveys."

A new 40-inch size limit is in effect statewide and applies to 94 percent of musky waters in Wisconsin, Simonson says. There are 41 waters that continue to have either lower size limits or higher size limits. Waters of Green Bay and Lake Michigan north of Highway 10 carry a 50-inch minimum size limit. The daily bag limit for muskellunge is 1 on all waters statewide, except Yellowstone Lake, Lafayette County (daily bag limit is 0), and Escanaba Lake, Vilas County (no daily bag limit).

The Guide to Wisconsin Hook and Line Fishing Regulations lists the wrong size limit for musky on those waters. Otherwise, consult the guide for information about specific waters or check DNR's new online regulation database to find size limits on the inland lake you plan to fish for musky.

Simonson says the new size limit, increased from 34 inches last year, will allow musky populations to better reach their full biological growth potential. "Angler harvest is low, but even low harvest of the larger fish still impacts the average size of fish in a musky population," he says.

The growth potential of muskellunge easily exceeds 40 inches on the vast majority of muskellunge waters in the state, except in a few, high density, slow-growing populations typically found in smaller lakes, Simonson says.

Creel surveys indicate that the length of muskellunge harvested over the last few years have averaged 38.7 inches, with 62 percent of harvested fish less than 40 inches. The new 40-inch size limit will reduce musky harvest by up to 60 percent statewide every year, which is expected to continue to improve the size-structure of populations, Simonson says.

A recent evaluation of the 40-inch minimum length limit on 24 lakes in Wisconsin over a 15-year period showed a significant increase in fish 34 inches and larger, as well as a significant increase in the percentage of fish 40 inches and larger, compared to lakes that had remained under the 34-inch minimum length limit in place statewide until this year, he says.

Down the road, the increased size limit also will help better meet the expectations of musky anglers in Wisconsin in terms of the size-structure of populations. State mail surveys of anglers indicate that most anglers consider a trophy musky to be 50 inches or greater. Among avid musky anglers, the proportion considering 50 or greater a trophy has increased from 44 percent in 1989, to 62 percent in 1999, and to 77 percent in 2011, Simonson says.

More information on musky can be found by searching for "musky fishing" on the DNR website.