HELPING MUSKY FIND THEIR WAY BACK TO GREEN BAY

GREEN BAY -When state fisheries staff hit the water last week in search of Great Lakes spotted muskellunge, they weren't sure how many they would find in their nets along the bank of the Fox River just south of Green Bay. It didn't take long for them to realize they hit the jackpot.

DNR fisheries staff collect musky which made their way into the nets.
WDNR Photo

It took several hours on a sunny but windy day to handle 44 musky, some as large as 51.5 inches long and weighing as much as 37.5 pounds. 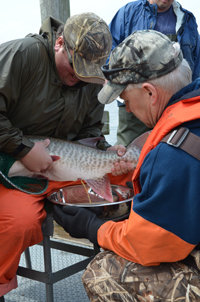 Department of Natural Resources staff captured all the musky in four fyke nets set out the day before. Biologists worked quickly to gather data, sometimes taking a powerful tail slap in the process.

Each fish is weighed, measured and tagged. Biologists took a genetic sample and blood sample to check for viral hemorrhagic septicemia (VHS) disease, and eggs and milt are harvested from as many fish as they could.

"A lot of what we are able to do in a day comes down to timing," Hogler said. "Are the fish spawning? How many of them are in the nets and how many females are at a point where we can safely harvest their eggs?"

On this day, four females provided approximately three quarts of eggs. Those eggs were then fertilized with milt from more than two dozen males to maintain diversity in the genetic pool.

"Seeing the musky, and the size of some of them, is satisfying. Two decades ago, you couldn't find these fish here but with the help of musky clubs, we're bringing them back," Hogler said.

The fertilized eggs are now at the Besadny Fish Facility in Kewaunee where they will be raised to be approximately a foot long. DNR hopes to stock 3,000 fingerlings this fall at a several sites around Green Bay. Last year, 5,242 fish were raised and released.