WISCONSIN BAT FESTIVAL SWOOPS IN TO MADISON MAY 12

MADISON -- See live bats up close and build your own bat house when a bigger and better Wisconsin Bat Festival (exit DNR) swoops into Madison on May 12. 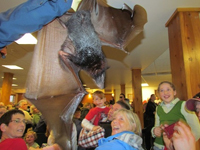 Live bats from around the world, like this Malayan bat, are a big hit at the Wisconsin Bat Festival May 12 in Madison.
WDNR Photo

"Usually bats fly at night and we rarely see them up close -- the Wisconsin Bat Festival is a chance for families to see bats from their own backyards and species from around the world at close range," says Jennifer Schehr, a Department of Natural Resources cave and mine specialist.

It features Rob Mies, TV personality and director of the Organization for Bat Conservation, presenting bats from around the world throughout the day. There are opportunities for kids to learn field techniques from bat biologists and a chance to meet and hear from children's book author/illustrator Brian Lies.

Admission for adults 16 and over is $10, and it's free for children with a paying adult. There is an additional charge for building a bat house. Tickets are also on sale for the grand prize drawing for mist-netting field trips with DNR Bat Ecologist David Redell, a personalized live-bat program at a venue of the winner's choice, bat houses and other great prizes, Schehr says.

All proceeds from the event benefit the Wisconsin Bat Conservation Fund, an endowment to promote bat conservation efforts in Wisconsin, particularly as concerns grow about the survival of some bats.

"Attending the festival is a great way to show your support for Wisconsin bats and have fun at the same time," Schehr says.

The disease has killed millions of bats in the eastern U.S. since 2006 and is getting closer to Wisconsin. It has not been found here yet, and important monitoring, education and detection efforts in Wisconsin are being funded in part by the Wisconsin Bat Conservation Fund.

Attendees will be able to learn how citizens can get involved in bat science by helping observe and report bats as they leave their roost at night, and using bat detectors to help document the presence of bats.

"Attending the festival is a great way to show your support for Wisconsin bats and have fun at the same time," she says.