WISCONSIN BATS GET A CLEAN BILL OF HEALTH

MADISON -- For the second year in a row, a statewide survey of more than 100 known bat wintering sites has found no signs of a deadly bat disease -- white-nose syndrome -- that has killed upwards of 6.7 million bats in the Eastern United States and Canada.

"We're extremely pleased to announce that neither the fungus nor the disease of white-nose syndrome was found in Wisconsin," says David Redell, a Department of Natural Resources bat ecologist. "It's a welcome relief in Wisconsin and in our neighboring states because so many of their bats winter here and any disease in our hibernacula could have far-reaching effects." 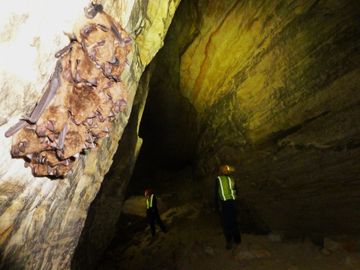 "The more time we have for research to understand how this disease spreads throughout populations of bats, the better able we can assess options that may possibly slow down the arrival and devastating effects of the disease," Redell says.

The delay also has given DNR time to work with private landowners to help them take voluntary steps to keep the disease out of caves and mines, with commercial tourist cave operators to educate visitors about the disease and prevention steps and for recreational cavers to learn how to decontaminate their gear to avoid accidentally spreading the fungus.

White-nose syndrome, so-called because the fungus leaves a powdery white fuzz on hibernating bats' noses, ears and wings, kills 70 to 100 percent of bats in contaminated caves. It was discovered in New York in 2006 and has since spread to 16 states and four Canadian provinces. 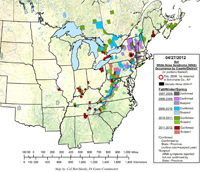 In January, the U.S. Fish & Wildlife Service estimated that 5.7 million to 6.7 million bats had died from white nose. Bat populations are susceptible to decline because of low reproductive rates -- mothers typically give birth to just one pup per year -- and white-nose syndrome has been particularly deadly to bats.

Wisconsin has one of the highest concentrations of hibernating bats in the Midwest. Some bats from neighboring states of Illinois, Indiana, Minnesota, Iowa and Michigan -- up to 300,000 bats -- spend their winters here so any disease affecting Wisconsin's hibernacula has far reaching impacts on the summer landscape.

To determine if the disease was present in Wisconsin caves and mines with wintering bats, DNR's bat surveillance crew searched 114 sites for signs including a fuzzy white fungus on the nose, mouth and ears of hibernating bats, and unusual behavior like bats hibernating near cave entrances where it's colder or bats flying outside during the day during winter.

The sites searched this winter represented 95 percent of the known underground locations and represented one of the most extensive surveillance efforts in North America, Redell says. The sites had been identified by DNR crews last year from among 800 potential sites searched and determined to have bats present and conditions suitable for the fungus.

"Our entire bat crew has been moving rapidly to survey our known bat colonies, seek out and document new colonies and develop plans aimed at minimizing the spread and effects of white-nose syndrome in Wisconsin," Redell says.

DNR also has put in place administrative rules that give DNR authority to manage bats and establish prevention and control options. Wisconsin added four bat cave species to the state threatened species list in June 2011, which makes it illegal for people to kill, transport or possess bats without a valid permit

DNR has been closely involved with researchers and other state biologists throughout North America in order to maintain and incorporate the most current knowledge of the disease and update the state's response plan, Redell says.

Tami Ryan, who leads DNR's wildlife health program, says DNR is "committed to continuing to collaborate with our many partners as well as other professionals with an interest in this important wildlife health issue," she says.