PESHTIGO, Wis. - Eggs fisheries biologists collected from sturgeon spawning below the Peshtigo dam are now on their way to the Upper Peninsula of Michigan under a cooperative effort between Michigan and Wisconsin to boost a naturally reproducing lake sturgeon population in Lake Michigan. There the fertilized eggs will be raised into fingerlings and released this fall into two rivers that tributaries to Little Bay de Noc, on the northern end of Green Bay. 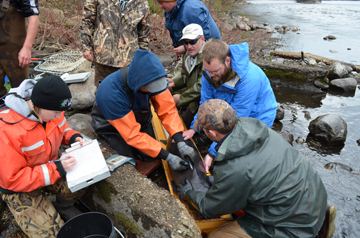 Biologists from Departments of Natural Resources in Michigan and Wisconsin harvested eggs and milt from adult sturgeon that had migrated up the Peshtigo from Lake Michigan to spawn last week. They collected about a cup of eggs from each of four female sturgeon, which was then mixed with the milt collected from numerous males to help create a more diversified population.

"The eggs we collect here go to streamside trailers, one on the Cedar River and one on the Whitefish River," explained Ed Baker, Michigan DNR fisheries research biologist. "The rivers historically had a sturgeon population but don't have much anymore and we're trying to fix that."

This is the third year of the program, which Baker says has a goal of raising and transplanting 1,500 sturgeon into Michigan waters of Green Bay. Biologists hope the sturgeon will implant on their new home and return to the rivers to spawn when they reach maturity, which for males takes about 15 years and for females takes 24 to 26 years.

"They (Michigan) were without an egg source from the Lake Michigan drainage so they originally went to the Menominee River," said Mike Donofrio, Wisconsin DNR fisheries supervisor, "but they had trouble getting eggs because the number of sturgeon spawning there wasn't large. So we identified the Peshtigo as a good system where there is easy access to the fish and there's a nice sizable population. About 300 to 400 fish spawn here."