The trio was nominated by Dan McGuire, principal at Tomahawk Elementary School in Tomahawk, and 15-year-old son, Jacob, for their efforts to help Jacob recover a deer he had shot that ran onto the Sanders' private hunting property. 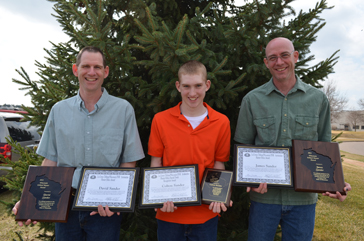 Jacob shot a trophy buck that ran onto property owned by the Sander family. Colton saw the buck go onto his family's land after Jacob shot it, but didn't see it had been hit until the deer ran past him.

"We walked to the fence line and Colton came down from his tree stand," Dan McGuire said. "We introduced ourselves and Colton used his cellphone to communicate with his dad."

"Colton spent a good chunk of the time tracking and trailing that buck," Dan said. "He actually took up the blood trail. He knew the property."

Colton, 16, knew he wanted to help recover the deer when he was first approached across the fence line by Dan and Jacob.

"I just did what I thought was right, and tried to make sure the deer wouldn't suffer," Colton said. "I didn't expect this (the award) at all. You just have to be ethical when hunting, and do everything in your power to recover a deer, and respect your neighbor's property."

The Sander trio not only allowed Dan and Jacob onto their property, but helped them track the deer for about four hours and then gave up for the day. The next day the entire hunting party spent another hour or more before David found the dead deer.

"There was lots of handshaking, smiles, pats on back, and we couldn't thank them enough," Dan said. "They were as happy as we were. They were invested in that deer."

"I was with Colton when he shot his very first deer," James Sanders said. "This episode brought me back to then."

Retired Wisconsin DNR conservation warden Steve Dewald, who co-founded the Hunter Ethics Award with former La Crosse Tribune outdoors editor Bob Lamb and Jerry Davis, a free-lance outdoors writer, noted he was impressed with how helpful the landowners were in responding to a stranger asking to track a wounded buck on their property.

"They not only gave up five hours of their own hunting time on opening weekend of the deer season, they also avoided hunting some of their hunting area so that the buck would not leave the area," Dewald said. "It is no wonder that the father of the young hunter was so appreciative of being helped by total strangers. The father understands how much this meant to his son and hopes he can return the favor to other hunters in the future. That is what this award is all about -- serving as a positive example for all hunters to follow."

The awards were presented March 17 at the Wisconsin Sport Show in Eau Claire. John Leigh of Argyle, finished runner-up for the 2011 award. Scott Braund of Holmen, received special recognition.