MADISON -- The number of trophy bucks taken in Wisconsin has risen by 857 percent in 30 years, with a record-breaking 383 entries during the five years ending in 2010, according to historical records kept by the venerable Boone and Crockett Club. 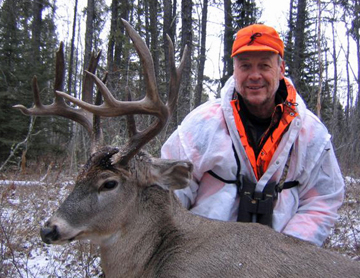 Wisconsin Buck & Bear Club measurer Marlin Laidlaw of Marshfield with a large buck he shot a few years ago. While impressive, it falls short of record book standards.
Contributed photo

That makes Wisconsin the number one state or Canadian province in North America for trophy whitetail production, muscling up from its earlier position of third.

The records show the number of trophy white-tailed deer in North America shot up by 400 percent during the past 30 years. During the period from 1980 to 1985, North American hunters entered 617 trophy whitetails, every one of those antlers scored by a certified Boone and Crocket "measurer," a designation that can take years to earn.

For the period 2005-2010, that number jumped to 3,090 trophy deer, dramatic evidence that North America's whitetail deer herd has grown by leaps and bounds.

One long-time, certified measurer is Marlin Laidlaw of the Wisconsin Buck & Bear Club, also a member of the Wisconsin Conservation Congress big game committee. Laidlaw says Wisconsin's number one ranking is about a lot more than numbers.

Laidlaw said while there is good deer range throughout the state, there are more unofficial refuges now - private lands where deer are not hunted or are hunted lightly - where bucks have a chance to grow older.

"Plus, you have people who just don't care to shoot small bucks anymore," Laidlaw said.

The last half century has seen a remarkable shift in hunter attitudes, Laidlaw said. He recalls the story of the third largest buck ever shot in Wisconsin, taken by Joe Haske in Wood County in 1945.

Haske was surprised when a big buck flushed right in front of him. He instinctively fired, hitting the deer in the rear, an unfortunate shot placement from the standpoint of a butcher.

As Haske's son, Roger, told the story, other hunters gathered to admire the magnificent antlers. Even then, when hunters didn't think much in terms of trophies, they recognized there was something special about this deer.

"But I remember my dad just being so mad about all the meat he'd ruined," the younger Haske told Laidlaw. "When the others remarked on the antlers, he shot back, 'You can't eat the horns.'"

Back then, and even into the 1980s, Laidlaw said, hunters were primarily interested in trading their buck tag for a freezer full of venison. Then as now, a young deer became a legal buck, for hunting purposes, when its fork horns reached a length of just 3 inches.

"About 85 percent of the harvest was legal bucks," Laidlaw said, "so there wasn't much carry over. Meat was meat. If it had 3-inch horns, it was dead."

But it's a fact that big bucks excite hunters; research has shown that just seeing a big buck can cause a hunter's heart rates to skyrocket. That's one reason big game hunter Teddy Roosevelt founded the Boone and Crockett Club in 1887 and why he and others developed a system in 1906 for scoring trophy game animals - whether deer, elk, bighorn sheep, caribou, antelope or bear.

"He (Roosevelt) felt they deserved recognition for what they had accomplished in the wild," Laidlaw said. "We don't measure people. We measure their trophies."

In the case of deer, antlers are scored with a series of precise measurements to include the circumference of the beams at four locations on each side, the length of each of the tines reaching skyward and the widest inside spread between the upward curving beams. Measuring the separate class of "non-typical" antlers is more complex.

In the 1960s, there were only a handful of Boone and Crockett measurers in Wisconsin. One of them was Pete Haupt, a colorful hunting guide in Hayward who believed Wisconsin wasn't getting recognition for its trophy hunting opportunities. In 1965 he and others - including Bob Hults, Arnie Krueger and Gerald Younk - founded the Wisconsin Buck and Bear Club with the mission of training measurers and "keeping Wisconsin No.1 in the record books."

In 1961, the national Pope and Young Club was formed to recognize trophies taken by bow hunters.

Both national clubs are ardent supporters of fair chase ethics and sound conservation practices as is the Wisconsin club.

In 1965, Wisconsin had five deer listed in the Boone and Crocket record book. There are now more than 300. There are more than 1,500 Wisconsin entries in the Pope and Young book and more than 5,000 deer have qualified for Wisconsin state records maintained by the Wisconsin Buck & Bear Club, which was sanctioned by the Wisconsin Legislature in 1996 as the as the state's official big game records keepers. The minimum standard for state trophy deer is marginally less stringent for gun hunting, 150 points vs. 170 points for the Boone and Crocket records.

Just as the number of certified trophy scorers has grown in Wisconsin, Laidlaw said, so has the information available to hunters. In the 1960s they were lucky to find a single book on deer hunting in a school library. Those same libraries are now well stocked, and the Internet - along with the emergence of cell phones, global positioning devices and motion-activated trail cameras - has changed the game completely.

"I'm wondering if there is a deer in Wisconsin that hasn't been photographed," Laidlaw said.

In recent decades, Laidlaw said, the "quality deer" movement emerged with landowners banding together and establishing hunting guidelines under which young bucks were more likely to survive. "Let 'em go, let 'em grow" has become a mantra among some hunters, even being adopted as a trademarked slogan by the Wisconsin Bear & Buck Club.

Not everything is rosy, Laidlaw said. He and others, while often fond of their local deer biologists, have been critical of state Department of Natural Resources deer management policies. A common complaint is that the DNR has not found a way to manage for quality deer hunting on public lands where hunters with little or no access to private property congregate with little incentive to "let 'em go."

Laidlaw said many hunters believe predator populations, primarily wolf and bear, have been allowed to grow too large. A great deal of research and public debate is being directed at these issues.

But in the meantime, Laidlaw and other measurers with the Wisconsin Buck and Bear Club draw crowds when they set up at small town fairs and big city deer shows. At each of these events, dozens and sometimes hundreds of people bring in their deer mounts - or their grandparent's deer mounts - to be officially scored, and they bring their stories with them, Laidlaw said.

While the Boone and Crockett Club is celebrating the resurgence of the North American deer herd and the exponential growth in trophy deer, the 150 or so highly trained measurers with the Wisconsin Buck and Bear Club can celebrate the unrivaled success of their public outreach efforts.

When it comes to keeping Wisconsin number one for trophy deer, they can justifiably claim "mission accomplished."

The Boone and Crockett state-by-state ranking of trophy deer entries can be found on the organization's website: www.boone-crockett.org/news/featured_story.asp?area=news&ID=125.

Information on deer research in Wisconsin and much more can be found on the DNR website.