SCIENTISTS GO UNDERGROUND IN EFFORT TO SAVE BATS

120 caves, mines to be searched for signs of deadly bat disease

MADISON - State bat scientists are going underground in February to search 120 caves and mines where bats hibernate for signs of a deadly disease that has killed millions of bats in the eastern U.S. since 2006 and spurred Wisconsin to add four cave bat species to the state's endangered and threatened species list. 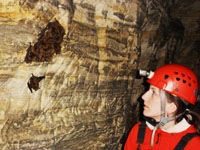 "White-nose syndrome has been wiping out cave bats across North America and it's on our doorstep," says Dave Redell, a bat ecologist who leads the Department of Natural Resource's bat crew. "We're at a critical time here for bats and we need help from the public if we're to save Wisconsin bats and continue saving residents the $1.5 billion in natural pest control they provide every year."

Voracious insect eaters, bats keep mosquitoes and crop and forest pests in check - a service one recent national study estimated at $658 million to $1.5 billion alone for Wisconsin's agricultural industry. While white-nose syndrome hasn't appeared in Wisconsin yet, Redell says he wouldn't be surprised if the bat crew finds the disease in Wisconsin caves this year. "We remain optimistic, however, and we've gotten great cooperation from landowners, partners and volunteers to keep the disease from arriving sooner than it could, and to slow its potential spread so we don't lose several species to extinction."

At the same time, he urges citizens to take steps aboveground to help keep bats healthy: identify bat roosting and hibernating sites, help count the bats and make a tax deductible donation to the Wisconsin Bat Conservation Fund. More information about these opportunities to get involved in efforts to save bats, and more information on Wisconsin bats and white-nose symdrome can be found on the special endangered species feature page of the DNR website.

Bat populations are susceptible to decline because of low reproductive rates - mothers typically give birth to just one pup per year - and white-nose syndrome has been particularly deadly to bats. Since its discovery in 2006 in New York, the disease has spread to 16 states and four Canadian provinces and has killed 90 to 100 percent of the bats in the caves and mines it contaminates. In January, the U.S. Fish and Wildlife Service [Exit DNR] estimated that 5.7 million to 6.7 million bats had died from white-nose.

Paul White, a DNR conservation biologist and part of the bat crew, says that last year's exhaustive search of caves has laid the groundwork for an efficient and effective search for white-nose syndrome this year.

"Last year, we checked out 800 potential cave and mine locations to see if they were being used by bats," he says. "This year, we can focus on those sites likely to get white-nose syndrome because bats were present last year and conditions are suitable for the fungus."

White and colleagues will look for a fuzzy white fungus on the nose, mouth and ears of hibernating bats, and for signs of unusual behavior like bats hibernating near cave entrances where it's colder or bats flying around outside at night.

If white-nose syndrome is found, DNR staff and the landowner will work together to implement a management strategy specific to the site and based on a variety of factors. Management options vary and include decontamination, cave and mine access management, rehabilitation and disease treatment. Some promising research may lead to possible treatments.

Building partnerships to meet the threat

Wisconsin has one of the Midwest's largest populations of cave bats and the state has been working with partners to comprehensively meet the threat of white-nose syndrome, says Jennifer Schehr, a DNR cave and mine specialist and bat crew member.

DNR bat experts have built working relationships with landowners of mines and caves and have helped them take actions to keep the disease at bay, like limiting access to cave sites and training people how to clean equipment and gear that have been near a cave or mine, she says.

Another important step in meeting the white-nose threat occurred in June 2011, when Wisconsin added four bat cave species to the state threatened species list. The new listing makes it illegal for people to kill, transport or possess bats without a valid permit. The DNR has also put in place administrative rules that give the department authority to manage bats and establish prevention and control options.

"Getting bats listed as a threatened species is an important step and a success in and of itself," Schehr says. "It highlights the importance of bats in Wisconsin and provides vital safeguards that give our cave bats a better chance to survive as an important part of our ecosystem and economy."