HORICON -- Bird watchers are in their glory: the number of migrating water birds is building to its massive annual peak at Horicon Marsh, the Mississippi River and other flyway hotspots while southwestern U.S. birds are stopping by for a rare Wisconsin visit.

"It's a fantastic time to be a bird watcher in Wisconsin," says Ryan Brady, a Department of Natural Resources research scientist who coordinates bird monitoring for the Wisconsin Bird Conservation Initiative [www.wisconsinbirds.org] (exit DNR).

"We're really seeing a big push of the water birds into the state at the same time we're on red alert for these rarities -- birds that are native to some other state but likely got blown off course and are now being found in Wisconsin and the Upper Great Lakes."

The past week was a special one for spying rare birds in the state, especially birds from the southwest. Birders have reported the first ever Inca dove -- enjoying a bird feeder at Concordia College in Ozaukee County. A Vermillion flycatcher has been spotted in Rock County, marking the sixth time this species has been reported in the state, Brady says. 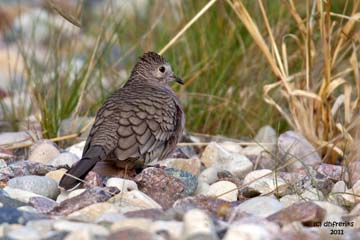 Other rarities reported included the scissor-tailed flycatcher in Kewaunee County, the western tanager at a Lincoln County bird feeder, and the Say's phoebe, which Brady called "the 10-minute wonder. One person saw it and it left." That lucky person was at the Kohler Andre State Park in Sheboygan County. Photos of many of these rare birds can be found on the Flickr site of Wisconsin eBird (exit DNR). 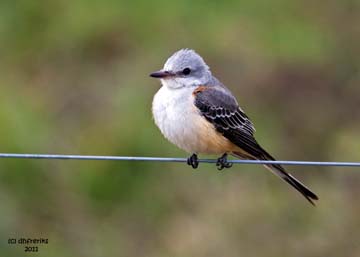 Such birds are called "vagrants" in ornithological circles, and no one is sure why they're alighting in Wisconsin, says Tom Prestby, DNR research technician.

"It's likely because of the southwest to northeastern-oriented jet stream, which steers some dispersing birds from their native areas to the Great Lakes," Prestby says. "Some young birds normally disperse in fall but a drought in the Southwest could be causing more than normal to do so because of a lack of food."

Most vagrants keep flying until something stops them -- in Wisconsin's case, the Lake Michigan or Lake Superior shoreline, he says.

The forecast is for the jet stream to remain almost the same so unusual species could keep showing up throughout the month, Prestby says. "Right now, the best chances to find something really rare are probably along the Great Lakes but the Vermilion and tanager (sightings) prove that anywhere is possible," he says.

Traditional migrants to put on a show as well

The start of November marks water bird season, Prestby says. "This is the peak of loon and diving and dabbling duck migration. Shorebird and hawk migration is winding down but a few of each can still be seen. Most warblers and other summer breeders have left but kinglets, creepers, yellow-rumped warblers, hermit thrushes and winter wrens are near the peak of their migration."

Andy Paulios, who coordinates the Wisconsin Bird Conservation Initiative, reports that tundra swans are beginning to stage on the Upper Mississippi River and in small numbers across Wisconsin. The first flocks showed up in Madison last week.

"It appears that this may be a decent winter seeing finches. Waterfowl migration continues to progress and build to peaks at staging areas. Of interest are a relatively large number of scoter reports on larger inland bodies of water compared to a normal year."

At Horicon Marsh, for example, Liz Herzmann, assistant naturalist, reported late last week that Canada goose numbers remain at 50,000 there, but are expected to increase as the weather gets colder.

"At peak, geese numbers will be around 200,000," she says. "They use the marsh as a stopover on migration. Duck numbers are down slightly to 60,000. We are seeing high numbers of mallards, green-winged teal, gadwall, and shovelers. Diving ducks such as ruddy ducks, ring-neck ducks and bufflehead are on the increase. You can still see trumpeter swans from Highway 49. Also, there have been several sightings of horned grebes."

Where to watch birds and report what you see

Viewing and photographing birds are popular activities across all age groups and state regions -- more than 40 percent of Wisconsinites age 16 and over, about 1.7 million people participate in the activity, according to the Wisconsin Statewide Comprehensive Outdoor Recreation Plan.

Wisconsin bird watchers are in luck. Horicon Marsh and the Upper Mississippi River backwaters are among 29 sites recognized as wetlands of international significance, in large part because they are so important to birds. Mississippi River wetlands, for instance, provide habitat to more than 300 birds and a flyway for 40 percent of the waterfowl in America.

Most birdwatchers don't need to go far from home to find what they're looking for--85 percent bird watch within 1 mile of where they live. Inland, places with a variety of habitat, especially a pond or wetland component probably have the best chance. Bird feeders and local parks are great places to view migration in many cases.

People can also report what they see via eBird. The site is meant for common and rare birds alike and is a great tool for keeping track of your own bird sightings while at the same time contributing data to the larger cause of conservation, Brady says.