GREEN BAY - The nearly quarter-century population growth of double-crested cormorants in the Wisconsin waters of Green Bay and Lake Michigan may have ended. Numbers had been on the rise since 1986, but in 2011 the population on islands where control efforts were conducted showed an 18 percent decline from the 2009 peak of 15,227 nests. Management efforts resulted in 2011 nest numbers of 12,534.

"I anticipate that this year's removal of around 2,500 adult birds coupled with ongoing egg-oiling efforts will result in future reductions in the cormorant population, and bring us closer to the goals set for the managed islands," said Tammie Paoli, a fish biologist with the Department of Natural Resources in Peshtigo. 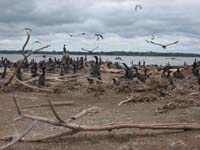 Cormorants, native to North America and the Great Lakes, were scarce in the 1950s through the 1970s. Their populations had declined as a result of habitat loss and the use of DDT, which contributed to eggshell thinning and cross-bill deformities. They were listed as a state endangered species in 1972, but numbers rebounded reaching problem levels on the islands in this century.

Additional background information about the cormorant's history in Northeast Wisconsin can be found in a February 2008 Wisconsin Naturual Resources magazine story Cormorant conundrum.