NOW IS TIME TO LOOK FOR GYPSY MOTH EGG MASSES

MADISON - Now is the time for land owners and managers to start looking for gypsy moth egg masses to predict the pest's population size and potential damage to trees next year. Most egg masses will be found on tree trunks and the undersides of branches, but they can also be found on buildings, firewood, vehicles, and other outdoor objects. 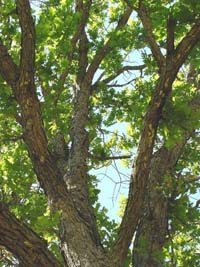 "We have seen very little gypsy moth activity this summer and do not expect to hear of many areas with gypsy moth populations high enough to justify aerial spraying in 2012," said Bill McNee, regional gypsy moth suppression coordinator with the Department of Natural Resources Northeast Region. "There was a large die off of the caterpillars in June of 2010 and 2011 due to diseases, and in addition to spray treatments these two years, there are hardly any areas where enough survived to predict heavy defoliation in the summer of 2012. However, if your property was heavily defoliated this summer and egg mass surveys predict heavy defoliation again in 2012, it is usually worth spending the money to spray."

State forestry officials say that if there are several egg masses per tree over a large area, such as a neighborhood or woodlot, spraying from the air next spring is the best method for minimizing defoliation. The egg masses are tan-colored, about the size of a nickel or quarter, and feel firm. Older egg masses that are soft and faded are not a concern because the eggs hatched this past spring.

Spring spraying should be supplemented with other actions for best results though - starting now. Homeowners with egg masses on individual yard trees can help to reduce the population by applying a horticultural oil spray labeled for gypsy moth, available online and at some retailers and garden centers, or by removing egg masses within reach and drowning them in soapy water for two days. 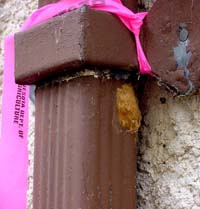 Treating egg masses with a horticultural oil spray is one of the best tools available to homeowners for reducing gypsy moth populations and helping to protect yard trees from defoliation by gypsy moth caterpillars next summer. The best time to oil egg masses is anytime after the first hard frost in fall through the first week in April, on a day with at least 40 degree temperatures. Although this strategy is not feasible in woodlots or on large acreages and will not relieve an outbreak on its own, it is very helpful as a supplement to insecticide treatments such as the aerial Suppression Program sprays in yards and urban settings.

The Department of Natural Resources offers an aerial Suppression Spray Program to communities, lake associations, and landowners that are suffering from very high populations of gypsy moth. The program is offered through participating counties which sign up areas at the request of local governments, lake associations, and individual landowners within that county. Eligible areas must be 20 acres or more, but this area can cover multiple landowners. The spraying is usually paid for by the entity requesting the spraying, although federal money may be available to offset up to half the cost.

"County and community participation usually depend on the number of gypsy moth reports they receive from their residents, so call local contacts soon if you had gypsy moth problems this summer and are interested in having your property sprayed next spring," advises Guthmiller.

Homeowners in residential areas should report their gypsy moth problem to their local gypsy moth contact, lake association, or community government. Woodlot owners should contact their town government or the county coordinator for gypsy moth directly. Infestations should be reported by the end of September if possible, as counties must apply to the DNR program by early December.

A list of county coordinators and municipal contacts is available online at Wisconsin Gypsy Moth. Click on your county on the red and white Wisconsin map on that webpage.