MADISON -- The dog days of summer are here, but the fishing is anything but dull for many fish species.

The last statewide survey of Wisconsin anglers found that the fishing was as good for most fish species during August as during any other month, says Brian Weigel, the Department of Natural Resources fisheries researcher who analyzed results from the survey during the 2006-7 license year.

"There is a hint that largemouth bass and catfish success may peak during August," he says. "In general, it appeared that fishing for walleye, brook trout, and brown trout wasn't quite as successful in August compared to spring or fall, however. 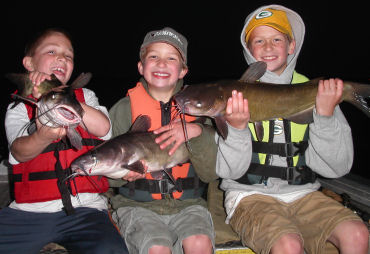 "Walleye is the single most targeted species, which may inspire the misperception that August is a slow month for fishing."

In fact, a slew of state record fish were caught in August. Bluegill, common carp, black crappie, mooneye, northern pike, white perch, coho salmon; pink salmon, pinook salmon (a cross between a Chinook and pink salmon), green sunfish and tiger trout records were all set using hook and line in this month. One state record fish -- for bowfin -- was captured in August in the alternate methods category.

Tips for fishing for walleye, bass and catfish

"A good summer tactic is to use a small weedless jig (1/8 or even 1/16 ounce) and only a HALF nightcrawler," he says. "Cast to deep weed edges, weed pockets and medium depth break lines and move it very slowly. The bites are often very subtle but the results can often be a limit of eater walleyes!"

Sommerfeldt's favorite target this time of year is largemouth bass, and he passes along a productive technique for finicky fish.

"Use a heavily salted and scented rubber 'worm'. They come in a variety of styles and names such as sinkos, rat tails, dingers, etc. - which are all different names for the same general bait. The key to using them at this time of year is to rig them un-weighted and weedless (usually Texas-rigged, or wacky style).

"The 'worms' are heavy enough to cast without weights and the way to fish them is to cast them to the deep weed edges and let the worm slowly sink to the bottom. Close attention is required as the strikes are not real hard and the bite is often just a subtle pick up, with the fish slowly swimming to the side. The angler must watch the line for any indication of the bite - which is often just a short jerk on the line, or slow movement to the side. If this is detected - set the hook and wait for the pull of the fish!"

While catfish aren't as popular a target as either walleye or bucketmouths, anglers still reported catching 777,094 of them in the statewide survey. In Wisconsin, representatives of the family include the familiar bullheads, channel and flathead catfish, and three small, reclusive species of madtoms, according to "Felines with Fins," in the November 2007 Wisconsin Natural Resources magazine.

For both species areas with woody debris will always hold catfish, he says, and reminds anglers to follow VHS rules when using cut bait and live bait.

One other note to remember about fishing in August. Ben Heussner, fisheries biologist stationed in Waukesha, notes that northern pike are extremely vulnerable in hot weather. Water temperatures are extremely high in many water bodies right now, and it is easy to catch them congregated in coldwater sources.

"Just a reminder that if you practice catch and release, please be mindful of proper handling techniques. Try not removing the fish from the water when possible by using a cradle," Heussner says. "Another technique is to try pulling the hook from the fish's mouth with a pliers while the fish stays in the water. Practicing these easy steps can not only enable the fish to grow even bigger, but can also give you a second chance to catch em'!"

Some fish biologists, technicians and supervisors shared some favorite tips for successful fishing during August for a variety of species. Reports of what fish are biting where can be found in the DNR Outdoor Report, which is updated every Thursday, and which people can subscribe to for free.

Yellow perch fishing usually improves in August on Green Bay. Anglers concentrate for this tasty panfish on the edge of weed beds from 10 to 20 feet of water. It's as simple as using a small minnow and split shot with a bobber or drifting just off the bottom. If you leave your bait on the sand then a round goby will likely steal it. Popular locations are off the Peshtigo, Oconto or Pensaukee rivers. On the east shore, popular landings are Chaudoirs and Bayshore parks. Please remember that you're fishing large waters and caution should be used if rough weather occurs. Walleye angling continues to be very good in Green Bay. Most anglers troll at very slow speeds (1 mph) with a night crawler harness. Good blade colors are gold and purple. You can also troll with a crank bait-style lures and common colors are purple, green and yellow. You want to place enough weight 6 feet in front of the lure or harness so it trolls in depths from 5 to 10 feet. Walleye fishing has been good throughout the bay from nearshore areas off Sturgeon Bay to Fox River and up to the Menominee River. Anglers may also catch sheepshead, catfish or large perch with this method. - Mike Donofrio, fisheries supervisor, Peshtigo

Trout anglers should try fishing in early morning or late evenings for best success. Many waters in western Wisconsin have a good Trico hatch this time of the year and can provide a real nice early morning bite. In addition, late summer is also grasshopper season and many large trout are caught annually by anglers using grasshopper patterns. Hopper fishing usually is best in late afternoon and can provide some real exciting action for larger trout. Warmwater rivers can provide good smallmouth bass, pike and musky fishing this time of the year. Try spinners, lures, streamers or crayfish patterns near woody structure as well as pocket water near boulders and other instream structure. Fishing can be good throughout the day and a small float trip in a canoe or small boat can make for a fun day on the water. - Heath Benike, fisheries biologist, Eau Claire

If you're interested in walleye, a good summer tactic is to use a small weedless jig (1/8 or even 1/16 ounce) and only a HALF nightcrawler. Cast to deep weed edges, weed pockets and medium depth break lines and move it very slowly. The bites are often very subtle but the results can often be a limit of eater walleyes!

One of the most popular gamefish during this time of year is largemouth bass. They are usually fairly sedentary in heavy cover and several tactics can provide some great action. First is a weedless frog or other weedless surface bait - and slowly 'hop' it across the top of lily pads or dense weed beds. A key is to keep a slow, steady hopping, as that seems to allow the bass to time its attack and get you more hook-ups. Another key is to learn to avoid setting the hook as soon as you see the splash - wait for the line to tighten a bit (indicating the bass has the lure) and then pull back to set the hook! And have fun getting them thru the thick weeds! Another very popular tactic for largemouth is a weedless rubber worm and fished right next to and IN the heaviest woody cover that is in 2 to 6 feet of water. A Texas-rigged worm or sinko is good for this and some heavier line and a stouter rod is required - because once a nice fish is hooked, you have to horse it out of the cover! The technique is to cast on the edge or into the wood tangle and let the bait sink into it. The bites are often subtle - a thunk or two on the line - and the fish will back up a foot or two to get back under cover. And here's the key - once you set the hook, you have to keep pulling to get the fish up and out of the wood so you can fight it in open water. If you set the hook and try to reel down, it's often too late and the fish has you wrapped up in the wood! And that's the need for heavier gear - you need some strong line and a stout rod to 'horse' them from the cover. - Skip Sommerfeldt, fisheries biologist, Park Falls