GOLDEN SHINER RECORD FALLS FOR SECOND TIME IN ONE MONTH

MADISON -- Anglers learn early that records are made to be broken.

Nine days after Maxfield JonasKrueger of Madison reeled in a new state record golden shiner, his record has been eclipsed by a younger angler. 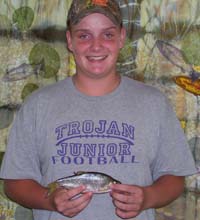 Branden Kluge, 13, of Juneau, has been officially confirmed as the state's newest record holder. Kluge caught a 5.2-ounce, 9.25-inch long golden shiner from Fox Lake in Dodge County on July 16. He had celebrated his birthday 10 days earlier.

Kluge's record-setting fish bested the 4.8 ounces golden shiner that JonasKrueger caught July 7, 2011, at Fowler Lake in Waukesha. Both fish swam away from the 3.4 ounce fish caught in 2009 from Dexter Lake in Wood County by John Kubisiak of Rhinelander, 40 years old at the time and a state fish biologist.

Laura Stremick-Thompson, the Department of Natural Resources fisheries biologist in Dodge County who confirmed the catch as a golden shiner, knew that the record JonasKrueger set was bound to change hands.

"I knew that was a nice fish, but I looked at the weight and said, "This is not going to last long and it's going to come from Dodge County," Stremick-Thompson says.

Branden Kluge was jigging for panfish that day with wax worm with a friend and his friend's dad when he pulled in the shiner.

"I was just thinking it was a small fish, a smaller size of a carp," says Kluge, who will be in eighth grade this fall at St. John's Lutheran School in Juneau. Tim Weisensel, the father of his friend, was aware that another 13-year-old angler had recently caught a state record gold shiner. He thought it might be worth it to have the rotund little fish weighed.

"Once my dad's friend told me it might be a state record, I got pretty pumped," Branden says.

The group continued fishing and caught two bass and two walleyes while jigging.

He was introduced to fishing by his dad, and tries to go fishing almost every weekend, primarily for panfish. I just like to reel them in and see how tough they are to land," he says. I also like to see what kind of fish it is and how big it is."

This time out, it was big enough for a new state record.

What to do if you think you've caught a record fish

Anglers who think they or someone they know has caught a fish that might be a state record should take these steps: