"It was a good year for small fingerling walleye production, and it's good news for future walleye fishing opportunities in Wisconsin," says Dave Giehtbrock, statewide fish production manager. "The longer winter led to later egg collection, which caused a logistical complication at some hatcheries, but the cooler water temperatures were good for the walleye, and we were able to pull off successful rearing at our hatcheries, producing the fish we needed to produce."

The walleye are stocked to provide walleye fishing opportunities where otherwise there would be none, and to help restore naturally self-sustaining walleye populations in the receiving waters. The vast majority of the state's walleye fisheries are naturally reproducing but stocking plays an important role in some waters. .

How long it takes these little guys to reach legal size depends on the water where they're stocked and regulations, but count on two to five years before these fish are likely to turn up in the frying pan.

The fish have been raised at the four hatcheries for the last month or two, living in hatchery ponds that DNR fertilizes to help fuel production of algae. Zooplankton in the pond eat the algae, and the young fish eat the zooplankton. Now, that the plankton and algae supplies are depleted, it's time to get the fish out before they start eyeballing one another.

Gary Lindenberger, supervisor for the Thompson hatchery in Spooner, says the cooler weather and water temperatures helped boost survival in the ponds and led to surplus fish that were able to help fill quotas elsewhere.

That hatchery stocked 1,125,000 fish including providing a surplus of about 100,000 fish. In addition, the Thompson hatchery transferred about 40,000 fish off site for additional rearing at cooperative ponds maintained by fishing clubs, and is keeping about 50,000 fish at the hatchery to be raised to large fingerling size. 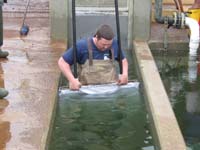 At Wild Rose, Supervisor Steve Fajfer says that returning to walleye production after 20 years was a learning experience for everyone, but that "we're very pleased. There were some challenges, but the fish survived very well, and we were successful."

Hatchery technician Ben Heimbach experimented with putting different densities of fish in the ponds to try to maximize growth rate and returns. The ponds were the same and the same amount of fertilizer was added.

"We're still crunching the numbers from that experiment and it will take a couple of years to know what density is best," Fajfer says. "But our fish in general were very good sizes. Up to 2 inches long, which is excellent size for small walleye fingerlings."

The hatchery is also keeping some of the young walleye on site to raise to large fingerling size, 6 to 8 inches. Those fish will be stocked out in the fall.

Lake Mills, which had the trucks rolling earlier in June, stocked 1,112,566 fish. The hatchery also produces rainbow and brown trout.

The Art Oehmcke hatchery has also finished its stocking and transferred 492,342 fish from the hatchery to Wisconsin waters, Giehtbrock says. That hatchery also is raising fish still on site to large fingerling size for stocking later this year.

More information on state fish hatcheries is available on the DNR website.