LOOK OUT FOR TURTLES ON THE ROAD

MADISON - State conservation officials are urging drivers to be on the alert for turtles crossing roads and highways.

During late May and early June, turtles leave their aquatic habitat near lakes, wetlands and streams to find drier areas where the female will deposit her eggs. Turtles can often be seen crossing roadways during this trek and throughout the summer and fall when hatchlings appear. 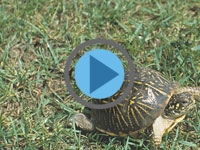 Retired DNR herpetologist Bob Hay cautions motorists to watchout for turtles on the roadway during their breeding season.
[VIDEO Length 2:58]

Although there are several key reasons for the decline in turtle populations such as habitat loss and egg predation by skunks and squirrels, road mortality has a large affect on the population of common turtle species such as snappers and threatened turtles such as the Blanding's and wood turtles.

Turtles mature slowly and take a long time to reach reproductive age. For example, ornate box turtles take 12 to 14 years before they can reproduce and Blanding's turtles take 17 to 20 years. Female turtles mature slower than males and are killed at a much higher rate because they must travel on land to find a nesting place, often crossing several roads.

While most turtles generally stop moving when they feel or see an approaching vehicle, motorists are encouraged to do the following during nesting season:

Use common sense (and a stick for the turtle to bite) if assisting a snapping turtle. Slowly pull the turtle across the roadway by its tail.

Wisconsin is home to 11 species of turtles, five of which are listed as either threatened, endangered or species of concern. This spring use caution when driving near wetlands and waterways and help save some of Wisconsin's turtles.