HAYWARD - This is the calving season for Wisconsin's small but growing elk herd and biologists with the state Department of Natural Resources, joined by a small army of volunteers, are busy searching the woods for newborns.

The search is expanded this year because a dozen of Wisconsin's wild elk, all young animals, were trapped this past winter and were moved to an "acclimation pen" 10 miles distant from the main herd as the crow flies.

That pen - a black plastic wall that surrounded 2.3 acres of forest around Clam Lake - was breached this past Wednesday by DNR biologists who quickly retreated after leaving piles of alfalfa outside the opening. This allowed the wary elk to wander out into their new territory, undisturbed by humans. 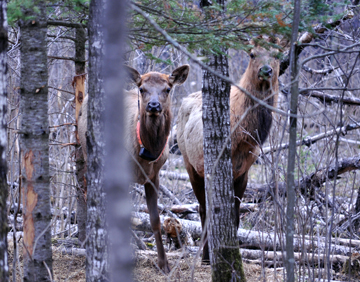 Among the 12 wild Wisconsin elk released from their "acclimation pen" this past week were cow number 277 and bull number 293, whose break-away color came off a couple weeks ago. Both are just turning two years old. The photographer, while not invisible to the elk, was sufficiently camouflaged to allow for this exposure. Wisconsin's wild elk are managed with minimal human contact, and they retain their natural wariness and fear of people. DNR Photo by Ed Culhane

They'll make quick work of the alfalfa and will then start in on the forest, concentrating on new growth along the edges of openings in the forest canopy. They may have a preference for large-leaf aspen, but for elk - an ungulate whose large rumen allows it to digest an even greater variety of plants than white-tailed deer - it's all food.

There are four young bulls in the group, all 2 years old, and eight cows, ages 2 to 4. Three of the cows are pregnant. This operation is an "assisted dispersal," a way of encouraging the herd to expand its range, which may in turn help the herd grow and remain healthy.

The reintroduction of wild elk in Wisconsin, which began with the release of 25 transplanted animals in May 1995, is a wildlife success story that is still unfolding. Progress has been slow at times, and there have been difficulties, but the herd has grown to about 150 animals.

It now seems likely the autumn bugling of elk, like the call of the loon, will become emblematic of the wild beauty of Wisconsin's Northwoods.

"I'm a lifelong resident of this area," said Ed Metcalf, a large animal veterinarian who has provided invaluable assistance to the elk program. "I never thought I'd be able to drive 15 miles and see elk. I've gone out a few times when they were bugling and listened to them. It's kind of special for people who get that opportunity."

The return of wild elk to Wisconsin is a collaborative effort. Initiated by the University of Wisconsin, the effort is managed by the DNR with assistance from the U.S. Forest Service, the Great Lakes Indian Fish and Wildlife Commission, the Rocky Mountain Elk Foundation and a large number of interested individuals, landowners and volunteers.

Stowell said that although the herd has grown to six times its original size in 16 years, it had not expanded beyond about 10 percent of the 1,112 square miles of the Chequamegon-Nicolet National Forest originally designated as elk range.

Among the factors slowing herd growth is the presence of State Hwy. 77 and the vehicle collisions that result. A motorist elk warning system installed in 2006, featuring flashing lights activated by the proximity of elk collars, has reduced annual fatalities from 2.9 per 100 elk to 1.4.

Additionally, the wolf packs in the immediate vicinity of the herd have become expert elk hunters and have removed increasing numbers of animals in recent years. It will take years for wolves in the new area to develop the same level of expertise.

The animals most vulnerable to various forms of mortality are calves, which have about a 50 percent survival rate, and yearling elk, which experience a 23 percent rate of mortality. Most elk losses occur from January through mid May. The 12 young elk in the acclimation pen were protected during this period. This will allow them to acclimate to new surroundings under less dangerous conditions.

The elk were captured in corral traps. This is an enclosed pen 45 feet in diameter. It has a swinging door with a counter weight that is held open by a cable and triggering mechanism that is activated by a radio signal from a blind 100 yards away. 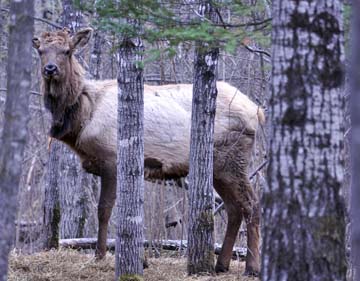 Of the 12 re-located elk, four were yearling bulls that are now turning two years old. This is one of them, photographed from a partially camouflaged position days before the release. It is wearing a radio collar. The pedicels, from which antlers will quickly grow this spring and summer, at rates of up to an inch per day, can be seen on the bull's forehead.
DNR Photo by Ed Culhane

"We've caught as few as two elk and as many as 31 elk at one time," Stowell said.

This past January, the DNR captured 95 elk, but with some being caught more than once, it worked out to 58 individual animals. Of these, 25 cows, eight bulls and one calf received new collars, which last about five years. Another six calves got their first collar. Some of the older elk have been collared two or three times.

Trapping is done with minimal human contact. Once corralled, elk are darted with immobilizing chemicals. Blood samples and other biological information are collected. Collars are replaced when necessary. The animals are hooded when handled and those being relocated were transported in livestock trailers with individual compartments.

The hope is that these young elk will adapt to their new surroundings. Learning how elk relate to various types of habitat is part of the ongoing project. A large lake and two rivers separate these youngsters from the main herd. It remains to be seen whether that will be enough.

"From what I've heard, people have seen them swimming across some of the smaller lakes," Metcalf said.