MADISON -- State forest health specialists report that populations of two leaf-eating, native caterpillars appear to be on the rise in some parts of the state. 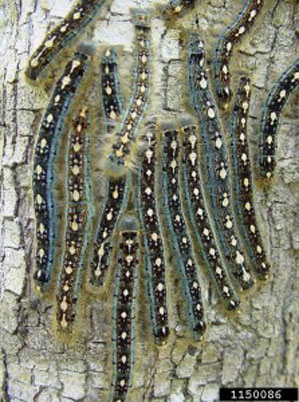 They can be identified by their blue sides and light colored "keyhole" or "footprint" shapes down their back.

Forest tent caterpillars prefer aspen, oak, sugar maple and a few other tree species. To reduce the number of forest tent caterpillar feeding on trees in yards, people can block them as they crawl up the tree trunk to the foliage by placing a ring of duct tape around the trunk of the tree, silver side out. Then spread a thin layer of horticultural pest barrier such as Tanglefoot or Pest Barrier on the tape. Do not use automotive grease or motor oil. Also, individual caterpillars can be sprayed with soapy water, or insecticide, crushed, or hand picked and drowned in soapy water to kill them.

Eastern tent caterpillar populations have been high in southern and central Wisconsin for several years.

Eastern tent caterpillars have a distinctive white stripe down the back.

The tents made by eastern tent caterpillar are found at the base of branches and are most often seen on roadsides or fencerows, or on open-grown trees. Eastern tent caterpillars favor crabapple, apple, wild cherry and wild plum trees though they also feed on oak and some other deciduous trees. The caterpillars are typically done feeding by mid June but their tents will be visible until rain and wind eventually break them down.

Caterpillars are already active this year so now is the time to find and kill them when their tents are still small. The easiest, least expensive method is to put on a pair of rubber gloves or use a rake and scrape the caterpillars and tent into a bucket of soapy water. Do this in early evening after most of them have returned to the tent. The next morning discard the soaked tent and dead caterpillars. If the tent is out of reach or if you prefer, tear up the tent with a stick and spray the area with soapy water or a contact insecticide. When the tents are first being formed, spraying a band of Btk based pesticide on the foliage around the tent is also effective. Spraying the outside of intact tents will not kill eastern tent caterpillar.

"Don't cut branches off of your tree to remove the tents. This causes much more damage to your tree than the caterpillars ever would," says Mark Guthmiller, forest health specialist with the Wisconsin Department of Natural Resources. "Also, do not burn the nets or webs out of the tree. This is dangerous and also kills the branches."

In high numbers, forest tent and eastern tent caterpillar can strip the leaves off of infested trees. Native trees such as wild plum, cherry, and maples have co-evolved with these native caterpillars and they can usually tolerate the effects.

"Defoliation from the eastern and forest tent caterpillars occurs early in the season and trees have plenty of time to grow a new set of leaves and produce the energy they need," Hillstrom says.

Healthy trees and shrubs usually recover and look better with more leaves later in the season. However, the production of a second set of leaves does stress the trees. Cumulative stress from defoliation, injury, drought, and more can kill the tree. In a yard setting, it is a good idea to help maintain the overall health of the trees by watering during dry periods, properly mulching, and minimizing injuries to tree trunks. Forest and eastern tent caterpillars also have many predators, parasites and diseases that can help manage populations, unlike the exotic gypsy moth.

What to do about a large infestation?

A bacterial insecticide containing Btk (Bacillus thuringiensis var. kurstaki) can help control caterpillars, especially when they are small. Because Btk has to be consumed by caterpillars it must be applied to the tree's leaves - even up high. Some certified arborists will perform ground based sprays for a fee and have a better chance of getting to a high tree canopy than property owners can on their own. Soapy water or other insecticides that are labeled to control these caterpillars are also effective. Be sure to follow manufacture's label directions.