Purchase, possession and stocking of this Asian carp illegal in Wisconsin

MILWAUKEE -- They aren't the fish that leap out of the water and knock out boaters nor the ones that can reach 100 pounds, but the discoveries late last month of grass carp in the Milwaukee River and in the Lower Wisconsin River are very concerning, state fisheries officials say.

"Grass carp aren't any more desirable in Wisconsin waters than the other Asian carp that are at our doorstep," says Mike Staggs, Wisconsin's fisheries director. "We don't need these things spreading around the state. We need everyone to follow the rules designed to stop the spread of Asian carp and other aquatic invasive species."

Grass carp are plant eating machines that can rob lakes of the rooted plants that provide important habitat for native fish and wildlife, and leave behind so much fish waste that they can fuel excessive algae growth. Because of the damage they can do, grass carp are illegal to buy, possess or stock in Wisconsin and the DNR destroys the fish when it finds them.

"If they were to reproduce in our lakes, it can foster algae blooms because of their eating habits," says Randy Schumacher, fisheries supervisor in southeastern Wisconsin. "When you have algae, you lose perch, blue gills, etc. that feed off insects that feed off plants. So they are every bit as bad as the common carp and worse."

Grass carp are one of many Asian carp species that are causing problems in the United States, but they are not one of the three Asian carp species that may be making their way up the Chicago Sanitary Ship Canal and in danger of colonizing the Great Lakes. Those species are the bighead carp, which eat plankton; the silver carp, which also eat plankton and have been known to jump out of the water and injure boaters; and the black carp, which eat snails and mollusks. A bighead carp was found last week on the St. Croix River at Prescott. Common carp, brought to the United States in the 1800s and stocked in Wisconsin, are invasive and destructive as well, uprooting aquatic plants and contributing to water quality problems. 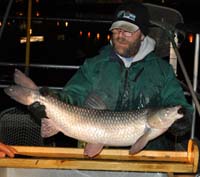 This 32.3 inch grass carp was captured in late April in the Milwaukee River.
WDNR Photo

The two fish were the only Asian carp captured during the surveys, which the crews conduct with boats that can deliver an electric current to the water that stuns fish and makes them easy to capture in nets.

DNR is now working with the UW-Milwaukee Water Institute to examine the fish caught in the Milwaukee River to determine whether it has the immature sexual organs that might mark the fish as sterile. The grass carp from the Lower Wisconsin Riverway is having a DNA test run on it in Louisiana. Both grass carp caught in Wisconsin last week are old fish to judge by their size.

Randy Schumacher, fisheries supervisor for southeastern Wisconsin, says a few grass carp have been found in the Milwaukee River in the last decade.

"We've picked up a few over the years now dating back to 2003, which suggests that somebody perhaps had them in a pond and they escaped or were transferred to another water."

Some grass carp bred to be sterile are allowed in Illinois, and Iowa allows both sterile and fertile grass carp.

Grass carp in the Mississippi River

Numbers of grass carp harvested commercially on the Mississippi increased starting in 2008, when massive flooding occurred in Iowa. Grass carp can still be legally sold and imported to Iowa, and the state itself produces at its hatcheries grass carp for stocking in aquaculture and other ponds. "The giant floods washed a ton of grass carp out of Iowa," Benjamin says. "Some came in the Mississippi River."

DNR has sought to take other actions within Wisconsin boundaries to prevent the fish from establishing populations here. DNR is cooperatively developing a set of Best Management Practices to lower the risk that fish imports will be contaminated with grass carp, mosquito fish and other invasive fish species. And businesses selling fish, aquatic plants and other regulated species are being contacted through a cooperative effort with DATCP and DNR with information about the invasive species rule, according to Mindy Wilkinson, who coordinates Wisconsin's invasive species classification program.