RICE LAKE, Wis. - Conservation Warden Russ Fell has been selected to receive the 2011 Conservation Congress Law Enforcement Officer of the Year in recognition of his collaborative conservation efforts in the communities he serves in Barron County. 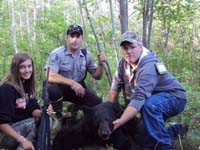 Warden Russ Fell (middle) with a novice hunter, her mentor and the bear they harvested in Barron County in 2010.
WDNR Photo

The honor comes from the Wisconsin Conservation Congress, the state's citizen advisory group that acts as the liaison between the public and the Department of Natural Resources.

His work with youth also is impressive, serving as a youth mentor in learn to hunt events in Barron and other nearby counties. He also collaborates with people in the community to hold the annual shooting sports youth day at the Rice Lake Rod and Gun Club.

"Russ also is held in high regard by his fellow wardens and contributes to maintaining the progressive reputation of the warden service," Stark said. "He regularly helps his colleagues outside of his Barron County area, is a field training officer, firearms instructor, and spends a lot of time instructing at the DNR recruit academy in Tomah."