OSHKOSH - State fish biologists are teaming up with local fishing clubs and other organizations to help learn more about walleye in the Winnebago System that they hope will make fishing for anglers' No. 1 target even better on the state's largest inland lake and its connected waters.

Department of Natural Resources fish biologists are implanting 100 walleyes with sonic tags that will enable them to study walleye movement patterns in the Winnebago system. Local fishing clubs and other organizations have raised the entire $32,000 needed to purchase the sonic tags.

"This is an exciting project and a great partnership," according to Kendall Kamke, a DNR senior fisheries biologist stationed in Oshkosh. "For it be successful, we need anglers fishing the Winnebago system to be on the lookout for fish that have been surgically implanted with the sonic tags, and to release those fish unharmed if they should catch one."

The sonic tagged fish will have two or three blue monofilament sutures on their stomach and a 3-inch long piece of yellow nylon inserted closer to their tail in addition to a numbered yellow tag, which have been used on the system for many years.

"For years, anglers have asked us questions about the timing and movement patterns of walleye in the system and we've just been able to speculate," Kamke says. "These sonic tags should give us some great information to answer those movement questions."

A 2006 economic impact study found that walleye were the favorite target by an overwhelming majority of anglers who fish the Winnebago system and say they target a specific species. The study, conducted by UW-Extension, UW-Green Bay and the DNR, also found that angling on the system generates a total impact of $234 million on the local economy and supports 4,200 jobs.

Walleye work to begin this week 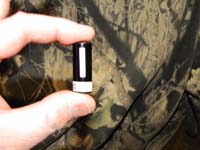 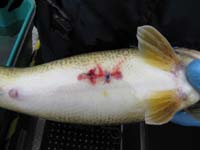 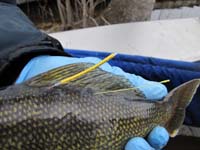 Starting this week, DNR fisheries crews from the Oshkosh office will implant the sonic tags into 100 walleye of various sizes. Fish will be tagged on the Fox River at Eureka and in the New London, Shiocton and County Road CCC areas on the Wolf River to characterize movement of walleyes collected from various locations, Kamke says.

In addition, spawning fish captured in Lake Winnebago will be implanted with sonic tags to see if they stay in the lake or eventually migrate upstream. The walleye receiving the sonic tags will range from 16 to 26 inches this spring.

The tags are similar to those used on sturgeon and catfish in the system and the existing network of 27 sonic receivers will be used to record the movement of the implanted walleye. Data are downloaded from the receivers in June and September, Kamke says.

The tags cost $320 each and have a battery life of about 900 days. Monies for the $32,600 project were entirely donated by sports clubs and organizations from around the Winnebago area, Kamke says. The sonic tags will enable DNR to track a fish's movement on their downstream migration this year and for two more years of both up and downstream spring runs, IF that fish doesn't die or get harvested.

"That's where cooperation from anglers is vital to keeping as many of these implanted fish swimming for as long as possible," he says. "My hope is that anglers will value this information, and the cost of the donated tags, enough to release the walleye with sutures on their bellies."

Posters showing anglers what to look for will be placed at many popular landings.

If anglers do end up harvesting one of the sonic tagged fish, Kamke is asking the angler to call him at (920) 424-7880 and make arrangements to return the small black cylindrical tag to the DNR so that the tag can be implanted in another walleye.