OSHKOSH - Big fish and challenging travel conditions were the story during the first three days of the Lake Winnebago System sturgeon spearing seasons. 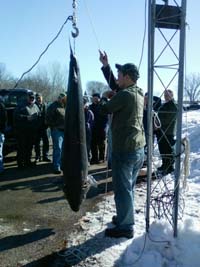 Through the end of spearing hours Monday, 881 fish system-wide had been harvested, with 52 of them, or 5.1 percent, weighing more than 100 pounds, according to Ron Bruch, Department of Natural Resources fisheries supervisor.

That includes the 185-pound, 80.2-inch female that Josh Genske of Sheboygan registered at the Calumet Harbor Station on Valentine's Day, and the 172.7-pound, 76.9-inch female registered by Jeffery Nozar of Oshkosh on opening day.

Those fish weigh in as the third and fifth largest sturgeon speared since DNR began keeping harvest records in 1941. Registration of all harvested fish began in 1955.

Seven of those top 10 fish have been speared in the last three years, Bruch says.

"The big fish we see now began growing into the 'big fish' category (100 pounds or more) just at the time when our new regulations were put in place to provide greater protection to them," Bruch says. "That's resulted in the impressive numbers of big fish in an expanded population overall of lake sturgeon we currently have in the Winnebago System."

Bruch says it's possible that the season could run the full 16 days allowed under law.

"Given the changing travel conditions on Lake Winnebago, it appears spearers will have many more days, possibly a full 16 days this year, to add to the top 10 list of biggest fish."

A list of the top 10 largest fish can be found on the Lake Winnebago System Sturgeon Spearing Season page of the DNR website.

Travel will likely be difficult for spearers

The deep snow and drifts spearers encountered on opening day of the seasons, Feb. 12, made it difficult to get around on the lake. That problem was compounded when warmer temperatures melted snow and made travel very sloppy. Windy conditions forecast for this week will push ice around, although colder temperatures forecast for the weekend may freeze up the slop and improve travel conditions by next week. "There's going to be a major adjustment for spearers to contend with over the next few days," Bruch says.

Lake Winnebago spearers after Monday were about one-third of the way to hitting the trigger for adult females on the big lake. Current updates are available on DNR's Lake Winnebago 2011 Sturgeon Spearing Season page.