OSHKOSH -- Record numbers of spearers are expected for the Feb. 12 opening day of the 2011 Winnebago sturgeon spearing seasons, and fish populations, increased harvest caps, and conditions are coming together for another banner year, state fish biologists say.

"There are more trophy-sized fish in the system than at any time during the last 75 years, and we've been able to raise the caps because the population has increased," says Ron Bruch, Department of Natural Resources fisheries supervisor in Oshkosh.

"Three weeks out, ice conditions are excellent and water clarity, fair to good now, is expected to improve. All of these factors should come together for another record-setting year in terms of increased spearing opportunities and the chance to land that really big fish."

License sales for the season set a new record at 12,423 (including the 490 sold for the Upriver Lakes fishery), reflecting the growing interest in recent years by a wider range of people attracted by the growing success of spearers and the big fish.

Last year, Ron Grishaber of Appleton set a new state record on opening day with the 212.2 pound lake sturgeon he speared, erasing the previous record by 24 pounds. Recent state harvest and sturgeon survey results suggest that there are many more big fish to be had.

Trophy lake sturgeon are typically considered to be any fish 100 pounds or larger, and historically fish this size have made up less than 1 percent of the total annual harvest. But in the last decade, the percentage of trophy fish has gradually increased over the last decade to more than 5 percent in 2010. 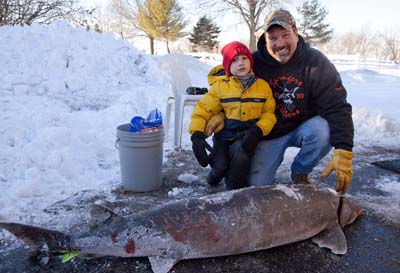 The Lake Winnebago sturgeon spearing seasons are as much about family as about big fish.
Michael Kienitz Photo

"The sturgeon harvest management system we currently have in place on the Winnebago System is a world model," Bruch says. "Key to our success is not only effective control of harvest, but also the process we use to pro-actively involve the public in our sturgeon management program - the public has great ownership and pride in this program."

In 2010, the DNR estimated there were 15,800 females and 31,700 males in the adult spawning stock. "Given these robust numbers, we have been able to raise the harvest caps again for the 2011 season which should translate into more spearing opportunities."

"Three weeks out, there is about 12 feet of visibility in most areas of the lake," Bruch says. "Clear ice on the lake in early January allowed enough sunlight through to generate an under-the-ice algae bloom. The bloom appears to be diminishing, and barring another bloom or run-off event soon, spearers are hoping water clarity will improve before opening day."

Ice thickness is generally 16 to 20 inches over most of the lakes, although people traveling on the lakes need to always exercise caution and know where expansion cracks and under-ice current areas are, Bruch says.

Fishing and spearing clubs around the lake system mark and maintain a network of roads on the lakes, as well as bridges over expansion cracks, for safe travel. Roads are marked every one-tenth of a mile with an upright Christmas tree. Christmas trees lying on their sides mark thin or dangerous ice areas.

Bruch expects nearly all 12,000-plus spearers will be out anxiously peering down their spearing holes when spearing officially begins at 6:30 a.m. Saturday, Feb. 12. Spearers are allowed to spear each day the season is open from 6:30 a.m. to 12:30 p.m.

Sturgeon spearing regulations for the 2011 season are nearly identical to 2010. The rules are the same on Lake Winnebago as they are on the Upriver Lakes, with the exception of different harvest cap triggers and participation rules.

The Upriver Lakes season runs from Feb. 12, 2011, through Feb. 28, 2011 on Lakes Butte des Morts, Winneconne and Poygan, or until the pre-set harvest cap for the Upriver Lakes is reached, or the pre-set harvest cap for the entire Winnebago System is reached, whichever comes first. Participation in this season was determined by a lottery for the required sturgeon tag, with 500 people selected from among those who submitted an application by Aug. 1, 2010.

Spearers can only participate in the season for which they have a spearing license. A full listing of regulations for the Winnebago System sturgeon spearing season can be found on the Lake Winnebago sturgeon page of the DNR Web site or at DNR service centers. 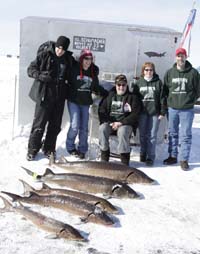 Opening weekend is especially an exciting time as the largest number of fish are typically brought in to registration stations those two days Besides spearers bringing their fish in to one of the 11 registration stations scattered around the lakes, thousands of onlookers also crowd many of the stations to catch a glimpse of the large pre-historic fish being brought in. The sturgeon spearing season lasts an average of about eight days before the harvest caps are hit, and in that short time spearers and other sturgeon enthusiasts produce an economic impact to the Winnebago region of more than $3.5 million dollars.

People can sign up for an improved e-mail subscription service or wireless updates to make it easier to learn about Winnebago system sturgeon spearing updates. Visit the Winnebago System Sturgeon Spearing Season 2011 page of the DNR website to sign up. Look for "Fishing Updates" and check "Sturgeon Spearing" to get the updates.

Updates will include a daily summary report from Ron Bruch, Department of Natural Resources lead sturgeon biologist, daily (and running) system harvest totals, and miscellaneous news from the day.

"If people want the information, they won't have to look for it anymore, it will find them," says Karl Scheidegger, DNR fisheries outreach leader.