MADISON - Cold weekend weather helped firm up ice in many parts of Wisconsin to kick off what is often some of the best fishing of the hard water season, state fish biologists say.

"Early ice fishing can be some of the best fishing for walleye, bigger game fish, for a lot of species," says Steve Avelallemant, fisheries supervisor for northern Wisconsin. "Especially on those lakes that are shallow and weedy. The fish seem to be accessible and biting more early in the hard water season. Any time before Christmas."

Fishing pressure nearly triples in December in Wisconsin after lakes freeze over, based on results from a 2006-7 statewide mail survey of anglers. Fully one-third of the state's 1.4 million licensed anglers reported ice fishing, and they spent about 1,589,000 hours in December alone, up from 624,000 hours in November of that year, according to Brian Weigel, the DNR fisheries researcher who analyzed the survey results. 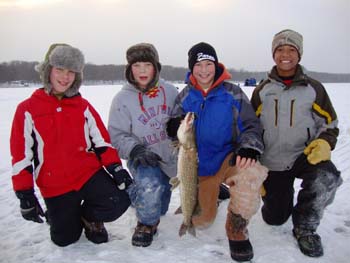 Ice fishing with your buddies, can anything beat it?
WDNR Photo

Avelallemant advises that ice anglers who want to maximize their chances of catching fish go to a lake with a good northern pike population. "Northern pike, when you look at their distribution worldwide, you'll find them all the way up into the Arctic Circle. They prefer cold water. Pike tend to get cranked up when it gets cold."

He advises that anglers check in with local bait shops to find out what the walleye are hitting on, and fish that. "A pike will take whatever you throw down," he says.

How to fish for panfish, pike and walleye

Panfish, northern pike and walleye are most frequently caught in the winter, with 11.7 million, 866,000, and 750,000, respectively, based on the mail survey results. Four northern Wisconsin fish biologists who are avid ice fishermen share their secrets for success in targeting the big three:

"Panfish are creatures of habit and habitat. They tend to be in the same general areas every winter. Don't waste a lot of time looking for that secret honey hole away from the crowds. You're probably just moving away from the fish. Instead, getting out there at the crack of dawn may put you on a hot bite before ever-increasing crowd activity puts the fish off. Most any tackle works when panfish are in a biting mood but most of time they will be in a neutral or negative mood. Light tackle is a big advantage to tease out a bite from reluctant fish. Quality 2- or 3-pound test mono with a limber rod to absorb any sudden shocks will handle most panfish situations. The line should stay soft and supple in the cold. If your tear drop can't pull the kinks out you're not even going to detect bites that could have been a fish in the bucket. Bobbers are still popular bite detectors but the smallest one possible that barely holds the bait up is best. Even then bites won't always take the bobber down. It takes some experience to learn when to set a hook on a bobber wiggle. Wire or spring steel bite detectors on the end of the rod are the most sensitive. They also let you detect bites while you raise or lower your bait. Slowly pulling your bait up and away from a fish you spot on your fish finder often triggers a strike. On good bite days, fish are actively milling around and you can sit in one spot and wait for the fish. On slow days, the fish are pretty stationary. If you drop a bait right down on a resting school you'll often get one or two to bite right away and then nothing bites even if you can still see fish on your finder. Since fish aren't moving, you have to move from hole to hole picking up a few here and there for a meal." - Larry Damman, fisheries biologist, Spooner 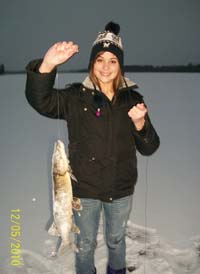 "When pike are active during early ice there is really no best time to fish. That's one of the reasons pike are so popular during winter - morning, mid-day, or afternoon can all be excellent times to catch pike. My advice? Keep it simple. Don't out-think your opponent. Pike are low on the evolutionary scale and supposedly have a brain that is 1/1305 of its body weight (Becker 1983). No need to get too fancy. Also, split the difference. Many anglers when setting tip-ups place their bait a certain distance off the bottom. For example, say water depth is 12 feet. Find bottom and set your bait one or two feet off bottom. If you are fishing in vegetation, my general rule is to think in halves. Twelve feet of water -put your bait at six feet. This serves two purposes. First, vegetation is still occupying a fair portion of the water column at early ice. If you place you bait based on x feet from the bottom there is a good chance it's in the vegetation. No sight - no bite. Second, predators like northern pike cruise the water column. Even if they are near the bottom they can find prey above them. The opposite is less likely to be true." - Terry Margenau, fisheries supervisor, Spooner.

"Our surveys show that this is the best time all winter to put a walleye on the ice. Caution should be used at this time of year as ice thickness can very greatly even on the same body of water. 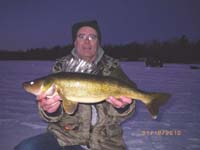 Walleye fishing can be fantastic during the early hard water season, as this 23-inch walleye caught and released in 2010 shows.

Walleye will be on the feed during this time period and frequenting the same places they were looking for a meal in late summer and fall. Deep weed flats and outside edges are the key sites to look for. Once ice and snow are on a lake finding these sites on your favorite lake may be difficult. Open water scouting and a GPS make finding these spots much easier and saves a lot of hole drilling. Walk softly on the ice and set up and wait away from your tip ups. Too much commotion on only a few inches of clear ice will spook fish.

Most anglers use tip ups, though jigging can also be very effective, baited with small sucker or medium golden shiners. Set some tip ups with each because on some lakes walleye sometimes show a preference for one over the other. Use light monofilament or fluorocarbon leaders (6- to 10-pound test) that are 2-plus feet long. Also try to use smaller sharp #10 or #8 (even #12) treble hooks because this makes the bait look more natural." - Steve Gilbert, fisheries biologist, Woodruff.

"My trick for walleye fishing . . . . just go fishing a lot! Actually, the key for me is that I mostly fish at prime time (the hour before dark), and I concentrate on break lines and substrate edges in 8 feet to 12 feet of water. As for bait, I mostly use medium-size suckers and fish them 4 inches to 6 inches off the bottom with my tip-ups." Skip Sommerfeldt, fisheries biologist, Park Falls.

Check out his predictions for ice fishing in 2010-11 and the daily diary Skip Sommerfeldt kept last hard water season, when he fished 68 days in a row. And learn how to make ice fishing fun for kids and the adults who bring them.

Ice claws: nail heads are ground off to a point and then covered with corks to prevent injury. The cord, made to the correct length, can be worn inside the jacket with each claw inside a sleeve. Or they can be draped over the shoulder and inside the coat. The wooden dowels and nylon cord will float, so they are accessible in an emergency.
WDNR Photo

Take steps to prevent going through the ice

"Check in with local bait shops so you know ice conditions before you go," Schaller says. "Tell someone where you're going and when you'll be back, and then go prepared with some basic equipment to help yourself or others should something happen, like wearing a float coat or carrying picks and a rope."

Ice anglers eager to start the hard water season are reminded to take steps to prevent spreading VHS and other fish diseases and aquatic invasive species.

Viral hemorrhagic septicemia, a virus that can infect several dozen fish species and cause them to bleed to death, was confirmed in 2010 in fish from Lake Superior. The disease has now been confirmed in all of the Great Lakes.

Avelallemant credits anglers for helping contain the disease -- it has not been detected in new inland waters since it was confirmed in the Lake Winnebago system in 2007 -- and says that the VHS prevention steps are helping keep Wisconsin fish healthy from other invasive diseases and species.

"Our lakes are under constant threat from invasive species. There's over 200 invasive species in the Great Lakes alone," he says. "The same tactics for preventing VHS will also help prevent the next one."

Following these rules will protect Wisconsin lakes and rivers and anglers' pocketbooks: a citation for carrying live fish away from a water runs $343.50, while the penalty for failing to drain the water from fishing equipment is $243.

Visit Ice Fishing Wisconsin for reports on what's biting where, tips for great fishing and for successful outings with kids, lists of places to go fishing, and more.