MADISON - Wisconsin's regular nine-day gun deer hunting season opens Saturday, Nov. 20 and runs through Sunday, Nov. 28. State wildlife officials say that while herd control has been the primary statewide focus over the last decade - and remains so in areas of the state this year -- herd growth is actually the primary objective throughout much of northeast Wisconsin for 2010.

Following a review of population goals that included extensive public input and legislative review, deer population goals were increased in 43 units this year. The end results are season structures and permit levels that will be aimed toward a more conservative antlerless harvest, according to Keith Warnke, deer and bear ecologist with the Department of Natural Resources.

As a result, this year nearly half of the state's deer management units are under a "regular" season structure, and 19 of those units - primarily in far northeastern Wisconsin - are under a buck-only season structure. In regular units hunters may only shoot an antlered deer with their regular license, unless they purchase an additional unit-specific antlerless permit if they are available for that unit.

Roughly the other half of DMUs remain under a herd-control structure because the population of those units is estimated to be 20 percent or more over established population goals. In herd control units, hunters may shoot an antlered deer with their deer hunting license and may shoot an antlerless deer with the free herd-control antlerless permit that comes with their license in any herd control unit.

There are 22 units in southern Wisconsin in the chronic wasting disease management zone that will again have unlimited earn-a-buck regulations intended to meet deer population goals and disease management objectives. In these units, a hunter must first shoot an antlerless deer during a 2010 open season such as the archery deer or October antlerless seasons or have an unused 2009-2010 buck harvest authorization sticker to shoot an antlered deer.

In 2009, more than 635,000 licensed hunters registered a statewide harvest of approximately 330,000 deer. This fell well short of Wisconsin's previous five-year annual harvest average of 492,000 deer. Several contributing factors resulted in a reduced harvest, but a reduced deer population and a reduction in antlerless harvest are thought to have played the biggest roles. A reduced annual harvest is also a sign that deer populations across the state are nearing management goals.

"The elimination of earn-a-buck outside of the CWD management zone last year also allowed all hunters to take bucks and pass on antlerless deer. Hunters who will be hunting in former earn-a-buck units may notice an increase in the number of antlerless deer and fewer mature bucks this year," Warnke said.

Regardless of statewide or DMU level deer populations and expectations, Warnke says that deer abundance on a single property or local level often does not reflect deer population trends on the larger scale. Pre-season scouting and discussions with local neighbors will give hunters a better expectation of the hunt in their local hunting area.

"Autumn is beautiful and fleeting. For hunters, this is the best time of year. For many, the preparations for hunting - setting up stands, scouting for promising trees, looking for deer sign, practicing marksmanship - are a big part of enjoying the season." 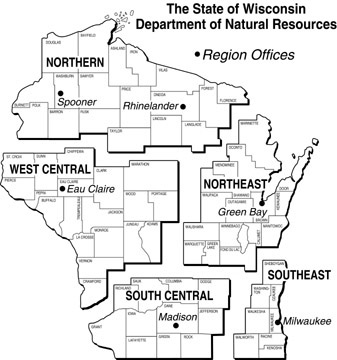 Deer populations in the Southeast Region remain relatively high compared to established population goals in all units except DMU 69, which is a regular unit. The remaining units are in Herd Control season frameworks, with units in the CWD Management Zone continuing under earn-a-buck regulations. While earn-a-buck regulations have been effective in reducing deer populations in the CWD units, there are still good deer numbers and harvest opportunities. Helicopter and fixed-wing deer surveys conducted in the CWD zone revealed significant, but unevenly distributed deer numbers. Scouting is more important than ever because of the lowered deer populations and uneven distribution

Good opportunities for deer hunting exist throughout the region but deer distribution varies greatly, depending on habitat and hunting pressure. Some of the bigger blocks of deer habitat are found on the Kettle Moraine State Forest and State Wildlife Areas. Hunting pressure is usually high on public lands. Scouting to find several hunting spots in advance of the hunting season will provide alternatives come opening day.- Dale Katsma, Acting Regional Wildlife Biologist

A majority of units in the West Central Region are near goals, with 10 units having a population high enough to require herd control. With the milder winter and the early spring, fawn production should be good. This past winter the overwinter goals were raised in 15 units allowing for a larger deer population in these units.

Many of the units in the West Central Region are highly productive farmland units where the deer herd can bounce back quickly, so hunters should plan to harvest an antlerless deer or two while they are buck hunting this fall to keep the unit at a more manageable and healthier level. - Greg Dahl, Wisconsin Rapids Area Wildlife Biologist

This past winter was a good one from the white-tailed deer perspective. Overall, it was classified as a "mild winter" in the region. There were a fair amount of cold days, but the really deep snowfalls were lacking. However, there was some severe winter in parts of the north and quota recommendations were lowered in these units due to winter.

The region also had a very mild and early spring. This allowed for an early green-up, which is absolutely critical for deer coming off the winter. We started to see fawns early this year. These fawns are really getting a head-start to get ready for the next winter. This will help with over winter survival and future production. This will give a real boost in DMUs where we are rebuilding the herd. It also gives us caution to make sure the herd does not exceed the natural carrying capacity of the land in many other DMUs in the north. This is why there is a real mix of season structures and antlerless deer quotas in northern Wisconsin for the 2010 deer season.

There are 15 DMUs in the region where the gun antlerless deer quota is zero, meaning these units are buck-only units. There are 24 DMUs that have a range of antlerless permits available and there are seven units that will be in the Herd Control Season structure.- Mike Zeckmeister, Regional Wildlife Biologist

Deer populations in the 16-county Northeast Region continue to be the tale of two differing habitats. The northern forest deer herd has not yet shown indications of improved productivity, while the farmland herds remain above goals despite long-running liberal harvest regulations for antlerless deer. Most of the region south of State Highway 64 and DMU 51A to the north remain in Herd Control status. Summer deer surveys in August and September will be watched for signs of improved fawn numbers in the north due to the milder past winter.

The six Northern Forest DMUs in the region remain below population goals and four of them will have a buck-only season framework for both archers and gun hunters in 2010 to give them the greatest chance for herd growth. As forests grow older, deer productivity declines. Hunters should assess their traditional hunting spots with an eye toward general forest age and consider positioning themselves near younger forests if they have not found satisfactory experiences in recent years.

With the absence of earn-a-buck requirements during the 2009 season in northeast farmland units; antlerless harvests dropped dramatically and deer herds grew slightly in most units. Fawn productivity is anticipated to be strong this year, and although some hunters will remain understandably conservative with antlerless harvest in pockets of low deer numbers, farmland unit hunters generally need to be comfortable harvesting antlerless deer in order to avoid another spike in the herd that will require more aggressive harvest regulations in the future. - Jeff Pritzl, Regional Wildlife Biologist

Deer populations are doing well in the South Central Region and hunters should have a great 2010, with one caveat. Hunters should be prepared to scout their hunting areas before the season, and also be prepared to move to areas where deer are found. While all the deer management units in the region are above deer populations goals, deer are very unequally distributed in the region.

One glaring observation is how unequally distributed deer are in the region. The helicopter surveys are conducted in one-square mile blocks. In some blocks, fewer than 10 deer are seen, while just a few miles away there may be 60 deer in a block. The deer season framework is based on managing deer at a certain density, recognizing deer numbers are high in some areas and low in others.

With the exception of northern Dodge and western Grant counties, all of the region's DMUs will continue to fall under the CWD season framework, which has not changed since 2008. Reducing deer densities is the primary objective to limit spread of this always fatal brain disease in deer, and EAB along with extended gun season opportunities to increasing antlerless harvest are still in effect.

Hunters will again be able to get their deer tested for CWD at both DNR and private registration stations throughout the CWD management zone. Increased testing will take place in Jefferson, southern Dodge, and in southwestern Sauk and eastern Richland counties to improve monitoring of the disease. Testing locations will be posted on the DNR web and press releases will be issued prior to the hunting seasons alerting hunters as to where they can get their deer tested. For more information specific to CWD and its management, see the Chronic Wasting Disease section of this publication - Doug Fendry, Eastern Area Supervisor and Don Bates, CWD Operations Supervisor